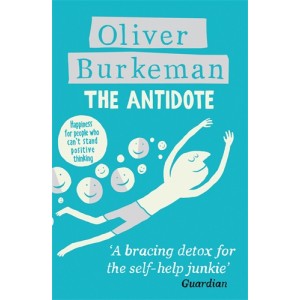 The book opens at the Get Motivated! conference in San Antonio, Texas, where Burkeman presents himself as something of a dry, English straight man staring into the cheesy-grinned face of overwhelming positivity. His writings here, he says, are “not an argument for bloody-minded contrarianism.” Rather, he attempts to seek happiness that rises through negativity.

It’s probably the best ‘self-help’ book that Canongate could have selected for me. Burkeman argues that feeling negative emotions rather than drowning them out can be a strong way to leverage happiness. I can relate. As a critic, one of my hobby horses is railing on Man of Steel and films of its ilk. As Batman says, “all men have limits” and my limit for sitting through 160 minute movies that are po-faced and have no levity to balance out the darkness was reached some time ago.

In Chapter 2, What Would Seneca Do? Burkeman outlines some of Seneca and the Stoics’ theories and techniques. One tenet of Stoicism that especially struck me was ‘the premeditation of evils’ – which states that one may prepare for the worst by considering it. Rather than eschewing negativity, as man modern-day positivity proponents recommend, the Stoics say face down the worst case scenario.

Mentally, I’ve always expected the best but prepared for the worst. Taking that one step farther, as Seneca does, and living that fear is the next vital step. Burkeman did this by speaking aloud on the subway; I did it by facing down my recent mind-block about exercise and got on with starting that 30 Day Shred. (Then could barely walk for 2 days, now need to get back to it. Stoics 1 – Nicola 0.)

One illuminating way that made me feel like I got this right, though, is in my business plan. When asked by my business advisor (my dad) for the one reason why I wanted to set up as self-employed, my ultimate goal, I told him: so I don’t have to work in retail again. That’s my bottom, and I’ve already lived it. (Lots of people work in and enjoy working in retail – I didn’t!) By facing down that potential bottom – setting myself a lower bar – I always have something to aim for. Even during the laziest of months.

Next up are chapters 3 and 4,which take on meditation and goal setting. I’ll speak to you then!

– One that’s been on my list for too long: Seneca’s On The Shortness of Life (more on it later).

– Also check out Austin Kleon’s summary and favourite quotes from the essay.

– David Foster Wallace’s stunning This Is Water speech [VIDEO] – reproduced here in text – a fantastic extension of Stoicism, extended to include compassion and empathy.