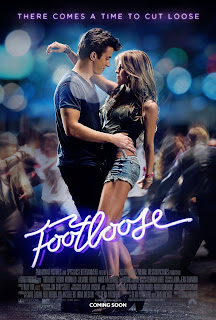 At the risk of outing myself as a child of the 90s, this film was a lot of fun. More fun, in fact, than the original.

Shifting our smouldering lead Ren McCormack from Chicago to Boston and trading his troubled family for a recently departed single mother, our loveable hothead is transformed into a multi-talented craftsman in the hands of possible up-and-comer Kenny Wormald. Meanwhile Julianne Hough steps into Lori Singer’s dancing shoes as preacher’s daughter Ariel Moore, native to the now-Southern town of Bomont, Georgia.

While this remake is more MTV than John Hughes, it also doctors a number of inefficiencies in the original script. Softened around the edges, both lead characters are infused with deeper backstories, tendencies towards confrontation over fisticuffs, and some serious moves. An updated but faithful soundtrack adds to the dynamism of the ever-awaited dance scenes, infusing that 80s charm with country flavour and a sprinkling of hip-hop beats. Between the serious and the salacious, a peppering of action sequences and fiery crashes fail to speed up the proceedings of a slow-moving story, but are pulled off with comparable aplomb.

Awkward dramatic moments and casual sexism put the film’s third act into throwaway territory, but behind the odd bungle there’s a cast of loveable hicks with big hearts and real community spirit.

Hammy, dramatic, but ultimately buoyed with euphonic energy, your toes will tap despite themselves.

Footloose is released in UK cinemas this Friday 14 October. If you’re a sucker for the original, it’s repeated this Saturday 15 October at 6.55pm on Film 4.