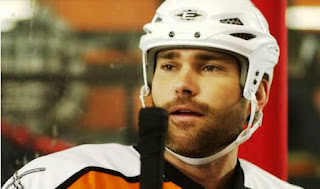 Superbad co-writer Evan Goldberg and Jay Baruchel team up for a dumb comedy on ice – and that’s exactly what you can expect. Seann William Scott stars as loveable meathead Doug who, with a low-region IQ and fists of fury, is everyone’s best friend — until you cross his friends. After an altercation at a local hockey game, he’s picked up by the team manager to be an ‘enforcer’: not a hockey player, but a fighter.

Jay Baruchel keeps proceedings light and the tone extraordinarily low with his effervescent Irish Yank, whose twin loves of hockey and crude sex jokes come together on his amateur TV show Hot Ice. Why an intelligent comedy actor would write himself such a part is baffling and, as can be expected, his string of effusive expletives fail to garner laughs. Only one character gets a shorter shrift with Alison Pill as Doug’s love interest. She’s given little to work with, bemoaning her lack of self-respect and slowly falling for Doug’s innocent sweetness.

Although Goon clocks in at a lean 90 minutes, it doesn’t endear itself til somewhere in the second act, while the third falls apart altogether, shedding sub-plots as it reaches its bloody conclusion. Uncomfortably crass and violent at turns, Goon hits the right notes just frequently enough for a one-time watch.