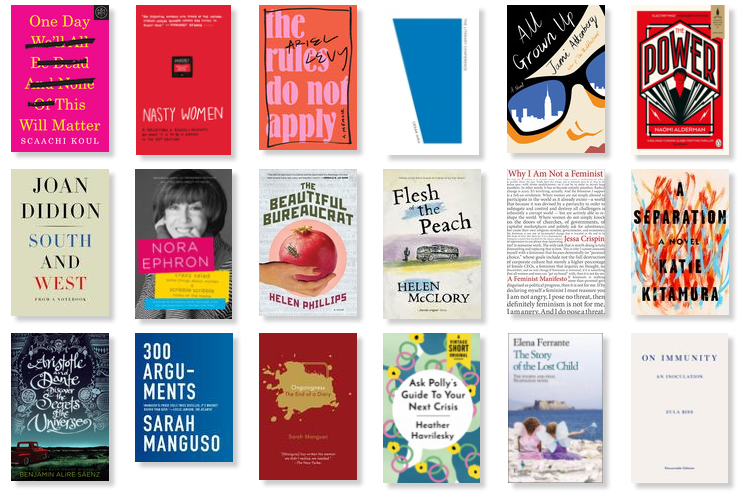 1. State of Wonder by Ann Patchett
2. Those Who Leave and Those Who Stay by Elena Ferrante
3. A Field Guide to Getting Lost by Rebecca Solnit
4. Call of the Undertow by Linda Cracknell
5. Ghosts by César Aira
6. Whatever Happened to Interracial Love? by Kathleen Collins
7. Swimming Lessons by Claire Fuller
8. Names for the Sea: Strangers in Iceland by Sarah Moss

9. Slow Days, Fast Company by Eve Babitz
10. On Immunity by Eula Biss
11. The Story of the Lost Child by Elena Ferrante
12. Ask Polly’s Guide to Your Next Crisis by Heather Havrilesky
13. Ongoingness: The End of a Diary by Sarah Manguso
14. 300 Arguments by Sarah Manguso
15. Aristotle and Dante Discover the Secrets of the Universe by Benjamin Alire Sáenz

16. A Separation by Katie Kitamura
17. Flesh of the Peach by Helen McClory
18. The Beautiful Bureaucrat by Helen Phillips
19. Crazy Salad & Scribble Scribble by Nora Ephron

20. South and West by Joan Didion
21. The Power by Naomi Alderman
22. All Grown Up by Jami Attenberg
23. The Literary Conference by César Aira
24. The Rules Do Not Apply by Ariel Levy
25. Nasty Women by Various
26. One Day We’ll All Be Dead and None of This Will Matter by Scaachi Koul

27. Ghachar Ghochar by Vivek Shanbhag
28. The Wages of Sin by Kaite Welsh
29. The Little Buddhist Monk by César Aira

30. On Trying to Keep Still by Jenny Diski
31. The Red Parts by Maggie Nelson
32. Cons by Yuri Herrera
33. The Answers by Catherine Lacey
34. Girls Will Be Girls by Emer O’Toole

35. Eve’s Hollywood by Eve Babitz
36. Hourglass by Dani Shapiro
37. Everything I Never Told You by Celeste Ng
38. Goodbye, Vitamin by Rachel Khong
39. The Proof by César Aira
40. Virgin and Other Stories by April Ayers Lawson
41. Exit West by Mohsin Hamid
42. Capitalist Realism by Mark Fisher

43. The Middle of Things by Meghan Florian
44. The Curious Incident of the Dog in the Nighttime by Mark Haddon

45. All Passion Spent by Vita Sackville-West
46. Murder on the Orient Express by Agatha Christie
47. Dirt Road by James Kelman

48. Sex and Rage by Eve Babitz
49. You Will Know Me by Megan Abbott
50. The Silent Companions by Laura Purcell
51. Dinner at the Centre of the Earth by Nathan Englander
52. Turtles All The Way Down by John Green
53. Women & Power: A Manifesto by Mary Beard