58. Is Everyone Hanging Out Without Me? by Mindy Kaling
★★★★★ – I’m not very familiar with Mindy Kaling, and I’ve only seen about 3 episodes of The Office, so I’m really not sure why I started reading this. It was ok, a light read, and the most interesting parts were probably her postgrad exploits. It’s cool to read about someone who is earlier in their success than, say, Tina Fey, but the cultural touchstone age gap between a 25 and a 32 year-old is surprisingly large. An ok distraction but not hugely entertaining.

59. Vile Bodies by Evelyn Waugh
★★★★★ – I suffered from an enormous lack of care while reading this novel. I get that the characters are supposed to be frivolous and vacuous and careless – but worse than that, I found them utterly boring and had no desire to find out what would become of them. Things perked up a bit around the car race scene, but not nearly enough. If you think I missed something I’d love to know.

60. The Man Who Mistook His Wife for a Hat by Oliver Sacks
★★★★★ – When he’s good, he’s very very good. When the story doesn’t strike your fancy… not so much. This started as a 4.5, ended as a – so I’d rate it somewhere in-between. Sacks presents some fascinating and sometimes scary stories here, with his signature charm and literary reverence (I love his high brow quotes, even if I’m totally lost). I was way more into the crazy sudden brain fart kinds of stories; the low-IQ autism tales, not so much; but your mileage may vary.

60. Great Expectations by Charles Dickens
★★★★★ – This took me ELEVEN MONTHS to read. Originally I’d planned for it to provide context when I reviewed the latest film adaptation, but it didn’t work out that way. The film pretty much sucked, with the exception of the performances (particularly Jason Flemyng as Joe Gargery – HEARTBREAKING). It took forever to read, and the plot is painstakingly slow, but fuck it – it’s great.

61. Leaving the Atocha Station by Ben Lerner
★★★★★ – This is one of those literary novels that reeks of the novelisation of autobiographical experience. The main character was okay, but I never felt I learned enough to get a proper read on him. There wasn’t a great sense of place, (in part because he’s so distanced from it, but still) and the love interests were completely interchangeable (which I put down to bad writing, much as I’d like it to have been intentional). It’s delightfully brief, and there were some interesting points of sympathy for the character in the face of dismay, but overall there were too many problems with it and issues left unsolved.

62. Going Postal by Terry Pratchett
★★★★★ – My first foray into both the Discworld and the considerable bibliography of Terry Pratchett. What took me so long?! This features the most wonderful/disgustingly named Moist von Lipwig, tasked to save the neglected postal system. (I actually read this during the week the Post Office was privatised from under us, boo.) If you’re like me and have no references for Terry Pratchett, it has humour in the same ballpark as Douglas Adams and settings and creatures reminiscent of those found at Hogwarts. Jolly good, though I did lose steam around the final chase.

63. Frankenstein by Mary Shelley
★★★★★ – It’s true what they say: this book is bloody brilliant. What more do I have to add to the discussion?

64. The Last Girlfriend on Earth and Other Stories by Simon Rich
★★★★★ – I’d heard so much about this short story collection that my expectations were probably a little too high. The stories here are short and fun with some creative premises. I especially liked one first person account of the life of a condom. While some of them were quite funny, others rehashed the ideas ad nauseum and some of the more high concept ideas didn’t quite hit the mark. I’ll still give his other stories a go, though.

65. We Have Always Lived in the Castle by Shirley Jackson
★★★★★ – This is one of those books that always leaves you begging for more. It makes the unrealistic tantalisingly real, a fairly obvious reveal a surprise, and some really important and painful points about human empathy. I was pretty baffled by this one throughout, which makes for a pretty unique reading experience, and I imagine in years to come I’ll remember the feeling of reading it more than the plot itself. 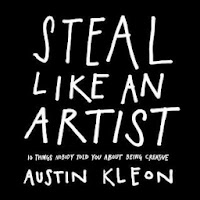 66. Steal Like an Artist by Austin Kleon
★★★★★ – Well-written with nice quotes and illustrations and good insights. I appreciate how finely curated and succinctly put it is, but plenty of the advice can be found elsewhere and it didn’t get me fired up. This was also my first read using the Oyster app, which was pretty cool.

What were your favourite reads in October?