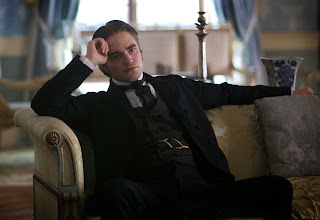 Cedric Diggory, Edward Cullen, and now Georges Duroy, 25 year-old heart-throb Robert Pattinson – affectionately known as R-Patz – steps into another role for the ladies in the screen adaptation of Guy de Maupassant’s Bel Ami. Stepping out of the sparkling vampiric skin of the chaste Edward Cullen and into the dapper facade of a man a little more attuned to the ladies’ needs, Pattinson’s already setting hearts alight in Glasgow as frenzied fans of the actor have been demanding news of his arrival since the GFF programme was revealed.

Fans of Pattinson are known for their own particular brand of fervour – one that sees them snooping outside his parents’ estate, riled all the more by news he isn’t home. Critics have censured Twilight for its celebration of self versus other — for dedicated fans, no is all the more likely to mean yes. One thing is certain, the audience will sparkle at the film’s Glasgow FIlm Festival release tonight.

If the (albeit 2D) presence of Mr Pattinson isn’t enough to make you want to lock up your daughters, Bel Ami is set to encourage further arduous swoons at this week’s screenings – and not only from the teenagers – as his character Georges Duroy beds Paris’ finest, played by the likes of Christina Ricci, Uma Thurman, and Kristin Scott Thomas. Ooo la la!

As Pattinson casts off the burden of sullen Cullen, forging ahead as Twilight fans breathlessly await the final chapter later this year, Bel Ami becomes an interesting next move. Although Water For Elephants put him in a new leading man position, its focus on forbidden love and dark debarring forces failed to preclude a good long mope. Instead, Bel Ami and an upcoming project with David Cronenberg – who has already pronounced Pattinson as the best actor he’s ever worked with – seem certain to turn our vampire into a warm-blooded movie star of great repute.

Bel Ami is released in UK cinemas on Friday 9 March.