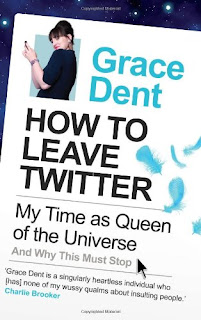 How to Leave Twitter does not go very far to explain how to leave Twitter. And rightly so, because Grace Dent is very much still on it. In both senses of the term.

What How to Leave Twitter does do is give a brief and humorous guide to the social network (or “microblogging” network, as it is less and less frequently termed) some insight in how to use it well, and an array of wittily crated thoughts and experiences of Grace Dent’s in her 3 years of using the website. In fact, a tidbit: she joined it a month to the day before I did.

When first I heard about this book I thought it an absolutely appalling idea for a book. I still think its title and description don’t do its content any favours. I became a little less sceptical after reading Scott’s glowing review in the Spectator (it’s much better than this one, go and read it), so when I spotted it in Fopp for a fiver, I thought I ought to give it a look.

The page to which I turned contained a collection of Tweets you often see on an ill-curated timeline. You know, the complaints, the rants, the humble brags and self-congratulatory retweets, followed by Dent’s imaginary dialogue with the offending Tweeter. Imagining the entire book must be like that, I almost didn’t buy it. In the end, though, I decided it might be worth a look, if only for the sake of a good exercise in critical blogging.

Despite my best efforts to rail against the only Twitter user with a substantial following and the right attitude to write a book about it, I found myself quite enjoying it. As Dent mentions, it’s difficult to sum up what Twitter is, since it’s such a different experience for everyone. What the book does is to lay out the typical timeline for Twitter uptake, some key points in learning to use it to your best advantage, and some of the ways ways in which Twitter has affected her life. From finding internet buddies who send you torrents of the TV show you want to review to the Twitter effect on marketing buzz, there are lots of interesting tidbits amongst the @caitlinmoran ramblings.

Twitter is full of sharp, opinionated women. Or, as men tend to call us, ‘sassy’. Footnote: I hate being called ‘sassy’. The only reason ‘sassy’ still exists is to denote ‘a woman who can verbally spar and issue droll one-liners at the same level as a man’ is because we’re so unused to seeing her we haven’t invented any other words since the 1950s.

Amongst the chatter, too, is a stand-out segment on the state of the media landscape and its relationship to women. Where women in TV and the media are concerned, Twitter stands unique as a place for female writers and comedians to speak unedited, where their references to Boardwalk Empire aren’t changed to Sex and the City and their references to top poop are left to reek joyfully at the writer’s behest.

I wonder if men get told so soften the tone of think pieces for fear that the poor male reader might feel under attack? Or are they allowed to be as pointy-tongued as they want, as men trust each other men to lap up a few truthbombs and realise they’re talking about some other jerk anyway?

For sharp-tongue and quick wit, get your butt on Twitter. If you’re already on there, you can read this extra-long tweet in book form by picking it up from Amazon here (UK) or here (US Kindle edition).

I’m tragically behind on my 52 Book Challenge. Check out the 52 Books page for micro-reviews or add me as a friend on Goodreads.