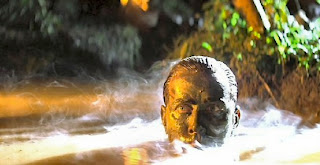 Okay, I admit it. I had never seen Apocalypse Now.

I did, however, feel like I had seen it. After 4 years as a film student, I’d seen every memorable scene, but never the film as a whole. With a cinematic and BluRay re-release looming, I ordered myself an advance copy, booked myself onto the BBC Movie Café, and arranged for Apocalypse Now to make its big(-gish) screen debut on my living room telly.

Based loosely on Joseph Conrad’s turn-of-the-century classic Heart of Darkness, Apocalypse Now was written by John Milius and intended to be directed by George Lucas in collaboration with Francis Ford Coppola during the Vietnam War. After disputes with Warner Bros, Coppola and a move to make The Godfather I and II. When he returned to the script years later, the feature’s production trials and tribulations began.

What struck me most about the film was its startling intimacy. Every colour and every wrinkle is captured as though in macro zoom. Though we’d rather languish farther behind, the camera brings us close, too close, into the green eyes of Willard; their long looks paired with his slow, desperate, punctuated speech. This physical closeness is impacted further by all manner of oppression: oppressive heat, oppressive lies, oppressive secrets, and that thick, heavy jungle air.

As I watched, I wondered, how would this look in 3D? The constant smoke adds depth rather than obscuring as it does in contemporary 3D cinema. Here, though, it’s part of the atmosphere and not the spectacle. The turquoise ocean spread beneath a convoy of helicopters blasting Wagner’s Flight of the Valkyries is yesterday’s troop of tanks rolling in an explosion of Drowning Pool — something timeless co-opted by something so iconic that it becomes timeless in itself. The debris, death, and destruction that batter your eyes and ears, these explosions of flimsy wooden everything, are a cinematic experience that transcends time.

Timeless too are the smaller moments, and a favourite of mine is Robert Duvall’s Lieutenant Colonel Bill Kilgore. Willard says that you can tell Kilgore will never get a scratch in ‘nam, and that’s exactly how Kilgore moves. The mania around him merits naught but a glance, his movements smooth as those around him jerk, turn, and duck. Walking upright through a minefield and rueing the imminent end of the war with a disappointed grimace, he revels in the madness of war in a stark contrast to its upcoming tragedies. It’s a confident quietness that is soon replaced with unmerciful filmmaking – the quiet sadness of death. These palpable shifts between acts are like the 3 stages of darkness laid out in Conrad’s novel. Between the shivering drunken insanity of Willard and the deeply ideological madness of Kurtz, there lie this pair of moments — one of strength, and one of sadness. These are the moments that split the war into acts: three dimensions of darkness into which we descend, waiting for the moment when we miss the bottom step.

Apocalypse Now is re-released in UK cinemas on Friday 27 May, and on BluRay on 13 June. 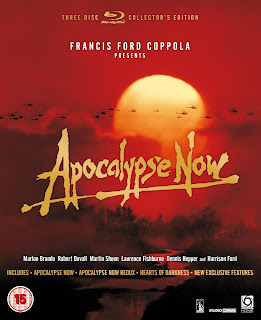 I’m giving away 1 copy of the new, remastered Apocalypse Now on 3-Disc BluRay from Optimum Releasing.

Featuring the remastered film, Apocalypse Now Redux, making-of documentary Hearts of Darkness, and a boatload of brand new extra features. All you have to do is:

Which classic film you’re most ashamed not to have seen?

One winner will be selected at random next Friday, 3 June.