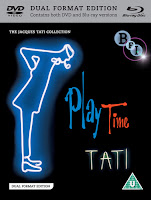 Jacques Tati’s character Monsieur Hulot was France’s answer to Charlot (their fond nickname for Charlie Chaplin) in the 1950s. If you’ve seen The Illusionist (Chomet, 2009) you’ve been introduced to Monsieur Hulot in animated form. The incongruously tall raincoat-clad clown with a hunched gait is the uncle-like protagonist of Tati’s seminal films Playtime and Monsieur Hulot’s Holiday (Les Vacances de M. Hulot). Both films have been re-released by the BFI on DVD and Blu-Ray with immersive extras.

Monsieur Hulot’s fantastical modernist world is filled with machines, overturned social conventions and futuristic portholes. His bumbling charm causes inadvertent and hilarious chaos wherever he steps in a precise pantomime that achieves boffo levels for the first time since James Agee lamented its death in his essay Comedy’s Greatest Era.

The new release of Playtime is complemented with extras including a rare audio interview with Tati, a short biographical film, and both DVDs include alternative ‘international’ soundtracks revised by Tati himself.

Both titles are available for pre-order from the BFI Filmstore & Amazon UK, and are released this Monday, 29 November.