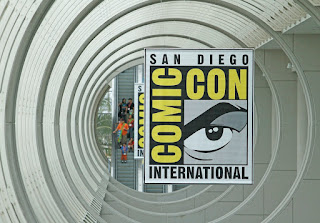 Hey, did I mention I was going to Comic Con?

Last week, I decamped from Fresno to San Diego and, more specifically, Hall H. The biggest hall at the San Diego Convention Centre, it’s where all of Hollywood’s studios tout their latest movies with teaser trailers, first-look clips, and panels. This year opened with panels for Twilight: Breaking Dawn Part 1, Aardman Studios’ Pirates! and Arthur Christmas. Pee Wee Herman also stopped by for a visit, while and 20th Century Fox showed off Prometheus and a whole lotta genre-riffic delights. But the real highlights arrived on Friday and Saturday with The Amazing Spider-Man, Tintin, and Twixt.

Thursday morning kicked off with the obligatory panel for the Twilight saga’s latest instalment Breaking Dawn: Part I. Once again, fans flocked the tented Hall H perimeter as early as Monday night, giving them the edge for front row seating at the cavernous hall. The Con learned its lesson after outraged fans missed the Avatar panel in 2009 due to the presence of over-keen Twilight fans. By contrast, this journalist rocked up about 20 minutes before the panel, finding a seat before new director Bill Condon, who will finish out the series, took to the stage alongside Kristin Stewart, Robert Pattinson and Taylor Lautner. There’s absolutely nothing new here, but fans screamed and “aww”ed their way through the Q&A portion – half racy-humoured, half conscious of the series’ imminent end.

The wet-behind-the-ears morning continued with an appearance from Britain’s favourite animation studio, Aardman, led by Peter Lord: co-founder and director of The Pirates! Land of Misfits. The stop-motion animation begins as something of a Pirates of the Caribbean rip-off before revealing its true colours as a Pythonesque caper starring crew of British brilliants Hugh Grant, Martin Freeman, and David Tennant alongside Jeremy Piven and Salma Hayek. With the animated originality of Chicken Run and the wit and referential humour of Wallace and Gromit, more can be said for this brilliant comedy gambol than its upcoming CG-animated brother, Arthur Christmas. A stab at the maths behind the magic of December 25th, it’s the kind of CG-misstep that, like Flushed Away, threatens to push Aardman off the map. To redress the balance, PeeWee Herman also dropped by with a snigger and a wave in support of The Pee-Wee Herman Show on Broadway, released on DVD this October. Now there’s something the big kids can get behind.

Hall H kept all its tricks up its sleeve for Sony Pictures’ big reveal: The Amazing Spider-man. Bringing Comic Con back to its film roots with a good old blockbuster comic book adaptation, Andrew Garfield kicked off the panel from the audience Q&A area, jubilant beneath a cheap Spidey costume. The ultimate closeted fanboy, Garfield’s opening speech rivals many of the Oscars’ finest as he expressed his desire to attend this very panel as a fan, stating the Spider-man “saved his life” and cementing his approach to the Spiderman comics as a canon as important as literary works. With Maguire’s blessing,The Amazing Spider-man sheds its comic book sheen and the stilted awkwardness of too-geeky Maguire and toothy Dunst, embarking on a re-imagining that’s closer to the original story (mechanical web-shooters and all). The latest footage feels spontaneous, free of earlier adaptations, and genuinely grounded in real life. Emma Stone is a true sweetheart as Gwen Stacey, and Rhys Ifans (who made headlines not for his appearance, but his arrest after the panel) co-stars as a forgotten favourite: Lizard. Though the footage is fresh from the printers and much of the CG unfinished, this is a remake that, despite early reticence, can officially pass the “unnecessary” reboot crown along to its cousin and predecessor, X-Men: First Class.

The rest of the weekend was opened the floor for some true filmmaking talent as in swooped the Hollywood greats for genre, and pop culture relevance. Ridley Scott, Steven Spielberg and Francis Ford Coppola became big daddies of Hall H, and technology quickly became the topic du jour.

Chief among them, 20th Century Fox engaged chief geek and Lost creator David Lendeloft – a long-time advocate of Comic Con to introduce Prometheus star Charlize Theron to the stage, alongside a live webcast – live from the set in Iceland – with director Ridley Scott. The feature marks Scott’s return to the genre he redefined 25 years ago, maxing out the studio credit card with massive sound-stages and maximum 3D. His do-it-live mentality and DP roots were on show as, without a twinge of irony, his 2D countenance announced: “I’ll never work without 3D again, even for a small dialogue scene.” If you thought the 3D fad was on its way out, I’m afraid it won’t be dead until every one of the world’s favourite Grandpas have had a turn – all, it seems, with a little help from Andy Serkis.

Steven Spielberg made his inaugural appearance to receiving the Inkpot award for life-time achievement and drum up some buzz for Tintin. Diving directly into the background to the film, he explained that a reviewer’s comparison of Indiana Jones’ kinship with Tintin’s adventures sparked his interest in the books and a decades-long fascination with its artwork. After owning the rights since 1985, a screen-test starring Peter Jackson as Captain Haddock trailed Snowy’s CG-rendering and became Spielberg’s official introduction of the teen reporter’s (drunken) canine sidekick. Peter Jackson then joined the panel, assuring us that Spielberg, “shows great promise” and commenting that, “While you’re never going to believe [Tintin] is live-action, it’s almost live-action”. Shot with motion-capture technology and rendered with animation, the 3D film takes motion-capture to a new level, playing with dimensions to give history’s most photo-realistic animated images realistic depth and weight. It’s also allowed him to cast Britain’s favourite two-some, co-writer Simon Pegg and his buddy Nick Frost, as twins. Time will tell of its success, but if one director is to conquer the uncanny valley with photo-realistic animation shot in 3D it has to be Spielberg. And what of The Hobbit? “The delightful thing is I’m enjoying it more than I thought I would – I’m having a blast,” says Jackson. With 60 out of 200 days filming in the can, they’re taking a break and returning to pre-production work while Martin Friedman films Sherlock at home. The film is tipped to be next year’s show-stealing Comic Con panel.

Speaking of show-stealing, Francis Ford Coppola did so on Saturday with his first appearance at Comic Con. Bringing technical panache and a real injection of originality to the panel construction, Coppola’s latest venture begins with a creepy-looking mask of Edgar Allen Poe with 3D lenses. Twixt begins with two concepts: 3D sequences in 2D films (designed to enhance the action without overwhelming the story), and a desire to “bring the live back to cinema”. It’s an experiment and an innovation.

“Film is in its infancy,” Coppola states, by way of introduction. “It has a lot more tricks up its sleeve, and surprises which we and our children will invent.” Having written, directed and produced Twixt, Coppola will also perform the film live with music from Dan Deacon. The ghost thriller stars Val Kilmer as a ‘bargain basement Stephen King’ on a book tour that takes him to a backwater town, haunted by apparitions including V (up-and-comer Elle Fanning). Armed with a 7-minute sequence from the film, Coppola demonstrated – with a true lack of coordination with his new technology – his ability to manipulate the footage; twisting the order, changing perspectives and voice-overs, and including music (mainly consisting of the lyric “Nosferatu, Nosferatu” like the medieval cinematic disco of his adolescence). While the ambitious trial fell apart at the seams, it seems to have ushered in a fresh feeling of experimentation and freedom that Comic Con panels previously lacked. With any luck, the further the big studios flee from Hall H, the more we might enjoy insights from maverick mainstream filmmakers like Spielberg, Jackson and Coppola.