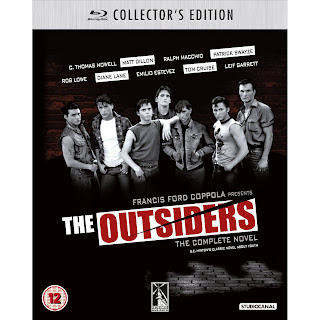 It seems Mr Francis Ford Coppola is on a mission to update and re-release every one of his films. After this year’s cinematic and Blu-Ray re-release of war classic Apocalypse Now, The Outsiders returns to DVD and premieres on Blu-Ray this month.

Based on the coming of age novel penned by the then-teen S.E. (Sarah Eloise) Hinton, The Outsiders follows the territorial rift between the downtrodden “greasers” and their South-side preppy counterparts, the “Socs”. The project is fabled to have reached Coppola through the letters of excited school kids from the Oklahoma town in which the film is set, spurred on by their teacher. Taking the 1960s bestseller and adapting it to befit an 80s audience, Coppola created an 80s Bratpack.

Filled with more recognisable faces than memorable performances, The Outsiders is Rebel Without a Cause before the appearance of James Dean, or Grease before they replaced their knives with combs and began to sing.

This re-release reintegrates 22 minutes of footage, including a new beginning and ending more true to S.E. Hinton’s original story. Era-appropriate music also replaces much of Carmine Coppola’s orchestral schore, injecting a little Elvis and Jerry Lee Lewis to proceedings. Indeed, the new music is one of the film’s highlights.

If The Outsiders is old hat, you can enjoy a whole host of new extras, including new audio commentaries with the director and stars Matt Dillon, C. Thomas Howell, Diane Lane, Rob Lowe, Ralph Macchio and Patrick Swayze; and a selection of deleted and extended scenes.

The new 2-disc Special Edition of The Outsiders is released on DVD and Blu-Ray on Monday 31 October.