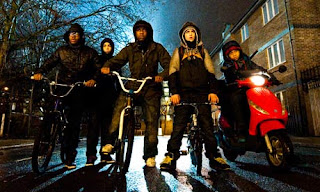 Radio’s Joe Cornish makes his big screen debut with hoodie-alien action thriller Attack the Block. Set in the tower blocks of Souf Landan, ‘ard as nails ‘oodies (or hooligans, as they’ll no doubt be known to the upcoming US audiences) clash with extra-terrestrial critters the size of gorillas that move like wrecking-balls armed with bright green gnashers. It’s probably what Dennis the Menace’s sidekick imagined he looked like, come to think of it.

When Moses (John Boyega) and his gang of block resident pals partake in a little late-night mugging, their retribution comes not in the form of policeman but a slimy contenance unlike any creature heretofore seen in the city’s fair boroughs. Knocked from their feet but regaining composure, our crew of showboating teens take to the titular block, whereupon they are pursued by many more of the aforementioned beasts.

The flow of belligerent chatter wears on (a slang vocabulary of about 10 words which you are taught as you go along, Joe Cornish claims), staunched only by bleating from mugee Sam (Jodie Whittaker) and a welcome reprieve from Nick Frost as the local, loveable dope dealer. Attack the Block doesn’t boast the most charming bunch of leads, but that makes it all the more fun to [SPOILER] see them eaten alive by aliens.

Despite its despicable subjects, after spending an hour with the blockmates they almost become palatable. Meanwhile, a deft camera keeps track of events without any of the monster-movie misdirection or shaky-camera cliché to which we’re so often subjected. Out-the-window shots of London make the block’s views worth saving, while the wee bruvs running around in their gangster training wheels provide plenty of comic relief. For the most part, it fails in many of the ways that Misfits succeeds, but pleasingly the mercy killings are in direct correlation with lack of likability.

The DVD includes a mini making-of documentary, a glimpse at the casting process, and clips of the cast.

Attack the Block is released on DVD on Monday 19 September. Buy it here. You get me?