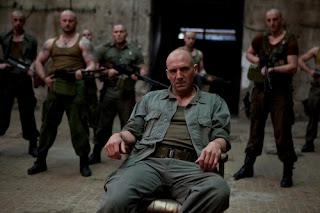 After the enormous success of The Deathly Hallows, Ralph Fiennes made the leap from one beloved British author’s oeuvre (albeit a franchise) to another. Taking on a little known Shakespearean tragedy in Coriolanus, Finnes’ ambitious directorial debut takes the form of a modern-day adaptation not at all reminiscent of Baz Luhrmann.
Penned by John Logan (Gladiator, The Aviator), Fiennes himself co-stars opposite Gerard Butler, Brian Cox, and the ubiquitous Jessica Chastain to bring the bard’s all but forgotten soldiers and sworn enemies to all their vengeful, back-stabbing glory in “a place that calls itself Rome”.
Its measured language throughout brings a sense of stability and pace to what is otherwise visually similar to most middle eastern war footage of the current day. Using TV footage that is at once surprisingly prescient and strangely familiar to draw out allegory, it’s a solid if somewhat inaccessible work bringing bard to screen in all its deprivation and none of its grandeur.
A darkly refreshing early summer DVD.
Coriolanus is released on DVD in the UK on 4 June.
Read more: Disgrace Book Review; Wild Bill Review.