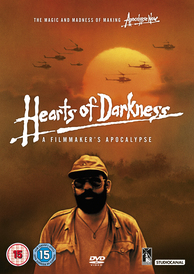 Deriving its name from the book that gave Apocalypse Now its story, Hearts of Darkness is perhaps the world’s best-known “The Making of…” documentary. Narrated by Francis Ford Coppola’s wife, Eleanor, it’s the source for much of the lore about the interminable production of the flamboyant director’s Vietnam War Film to end all Vietnam War Films. Hearts of Darkness follows the 238 day, $20 million shoot, faithfully recording its legendary mishaps: from replacing its original lead (Harvey Keitel) two weeks in, through sets destroyed by monsoon rains and helicopters borrowed from the Filipino army recalled to fight rebels in the middle of filming; to the nightly, frenzied script re-writes. All these fed a media storm back home, so that it was probably no wonder Kramer vs Kramer won the Oscar for Best Picture – everyone must have been sick of hearing about the Apocalypse out East. All said, this 90 minutes of self-indulgence makes it a cinephile favourite.

Hearts of Darkness is available to buy on DVD from Monday 9 January. (It’s also part of the Apocalypse Now Blu-Ray box set released back in May.)