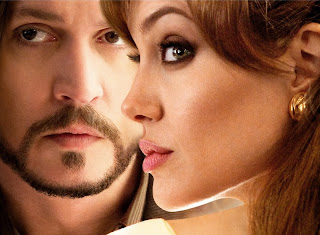 Jolie stars as enigmatic beauty Elise, who is under surveillance by gangster Reggie Shaw since her boyfriend, mysterious embezzler Alexander Pearce, has him monumentally pissed off. Hapless tourist Frank (Depp) – perhaps math academia’s only first-class traveler – is the target of her faux-affections to divert the scent of Scotland Yard. Predictably, none of them are what they seem, so it’s fairly easy to guess who really works for whom.

Jolie slinks around in glamorous clothing, seeming to achieve nothing but look the part and have every man gawp like proverbial moths to the flame. Why Scotland Yard ever needs to communicate via radio is probably the film’s biggest mystery, as they’d handily follow the sea of turned heads like a flaming arrow through any crowd, all the way towards its obvious ending.

Meanwhile, Depp mumbles and twitches dully, breaking into movement only when doing his best Daniel Craig impression by skirting along rooftops and falling into market-stalls. Suddenly, amongst the soaring strings and glamour shots sponsored by Venice tourist board – it’s Quantum of Solace with added pyjamas.

Whether it’s theatre or heavy-handed soap opera set in the sunshine is difficult to decide. Frank’s transformation into Elise’s “man who does what he likes” means becoming a male version of her. It turns out even the slyest foxy women of Hollywood melt beneath their make-up and ultimately need to be saved. Hooray for femininity!

Hollywood is as Hollywood does, and The Tourist’s head-on approach to this is almost refreshing. What kills it is the self-perpetuating promo material cliché that pervades from start to finish. Like a North-Hollywood sunbed parlour named Euro Sun, Jolie’s “glamour” and Depp’s dorky, cultureless American completes the picture of a film labouring under the pretence that multilingual suits and cardboard-cut-out Englishmen (that means you, Bettany) makes for a suspenseful thriller with elegant European refinement.

The Tourist is released on DVD on Monday, 25th April.