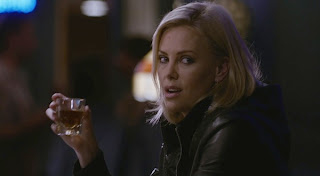 Screenwriter Diablo Cody and director Jason Reitman reunite after the coming-of-age blitz of Juno. Charlize Theron joins them on this new project as their protagonist, a caustic 30-something in her own form of arrested development, Mavis Gary.

The ghost-writer of a teen, or YA, book series (“YA, that’s industry speak for Young Adult”), Mavis has moved on from life in small-town Minnesota to the “Mini Apple” – though nobody calls it that anymore – Minneapolis. Once prom queen and the girl they all wanted to be, Mavis’ life has dissolved into an endless series of binges – of both the drink and reality TV varieties. Her way of life, though deplorable in the white bread middle America sense, is oddly alluring – though understandable as it’s far less oddly so to her former neighbours.
Upon receiving a new baby e-card from her high school sweetheart, she decides to return home to rekindle the romance of her life. And her scheme is as whacked as it sounds.
Almost immediately, Mavis finds herself in the company of former classmate Matt (Patton Oswalt), whom she barely remembers, save for the fact that his leg was shattered by some jocks who thought he was gay in high school. Lumbering around this small town, this poor, big-hearted creature lends a dose of pathos to proceedings as Oswalt breaks out his best loveable loser moves in his attempts to guide this larger-than-life, beautiful lunatic to her senses. If Eternal Sunshine’s Clementine was a fucked up girl looking for a state of mind, Mavis is a fucked up girl who doesn’t realise that her state of mind is equally fucked.
As Mavis’ scheme ticks inexorably towards its doomed conclusion, there’s plenty to love about Cody’s matured, pared-down writing. Though the script loses its way towards the climax, some missteps and mishandlings of the key point of drama are not enough to spoil this fairly extraordinary Hollywood narrative.
Everything that is wrong about this film’s script feels, however uncomfortably, right. Young Adult bravely goes where most narratives won’t, forgoing the kinds of closure and resolve that film watchers crave – and for its crimes, is all the better.
Young Adult is available on DVD in the UK from 25 June.