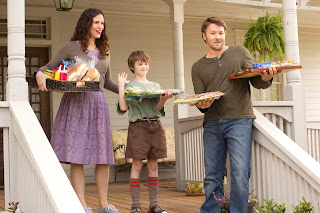 Aimed squarely at Middle America yet with no audience in mind, The Odd Life of Timothy Green is a modern Pinocchio story so boring it’s set in Stanleyville: a fictional town specialising in pencil production.

Jennifer Garner and Joel Edgerton star as Cindy and Jim Green, a couple who cannot conceive and are advised to pursue adoption. Before throwing in the towel, they compile a list of traits for their non-existent child, which they bury. A mythical rainstorm follows and hey presto, Timothy Green (CJ Adams) is “born”. With leaves on his legs and a (thankfully not literal) song in his heart, the picture book story that follows is a criminally bland series of events in the life of this happy-go-lucky fairytale boy.

In a world filled with 2-dimensional Stanleyvillains, the film’s entire premise is hung on an icky cuteness that doesn’t last as the plot drags its heels through an Indian summer of typical middle-American set pieces. Sadly Peter Hedges’ uninspired script didn’t wither and died with the autumn leaves, but the film’s box office presence is likely to.

Save your cinema visits for a kids’ film that won’t bore the pants of children and adults alike.

The Odd Life of Timothy Green is released in UK cinemas on 4 April 2013.