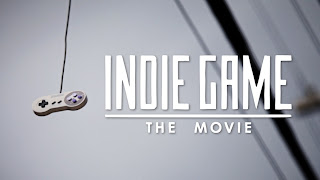 IndieGame: The Movie – as the title suggests – an indie movie for indie video game addicts. While teams of hundreds toil away on big-name releases like Call of Duty and L.A. Noire, a team of two sacrificed their social lives to create Super Meat Boy. Meanwhile Phil Fish, creator of the much-anticipated video game Fez, spent 4 years designing, re-designing, and lawsuit-battling to retain creative control and a timely release of his personal indie playpen. Braid creator Jonathan Blow also chips in with tales of success and internet comment evisceration.

Made possible through crowd funding, the film, directed by Lisanne Pajot and James Swirsky, is comprised of interviews interspersed with gameplay. Capitalising on simplicity, they capture the influences and passions of these sometimes life-long creators. Driven by the desire to make something deeply personal, the film aptly demonstrates just how much they are willing sacrifice to that end, bearing hardship and lives on pause to reach that goal of a completed game.

IndieGame: The Movie screens at Glasgow Film Festival on 19 and 22 February. Buy your tickets here.