It’s one thing to sit around and write about low-budget filmmaking, and another to go out and raise the money to make your own. A friend of mine, Amy Hawes, is currently campaigning for funding to make her short film, Falling for Fitzgerald. It’s a great project and a charming story, so I asked her to share her story here. I hope that you’ll all be inspired to pick up a camera, or live vicariously through Amy and donate! 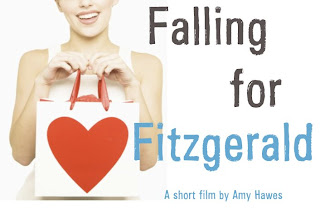 Eighty-seven days ago, on Friday the 26th of November, 2010, I set up a page on American crowd-funding website IndieGoGo. I had written a short story, called “Unlucky for Some”, which I then wrote into a script entitled “Falling for Fitzgerald”.  I wanted to raise some money to make the film myself, a few months down the line.

Anyone can make a short film, using absolutely zero money. I have done it, several times before. It’s about getting the use of free equipment (i.e. get involved with student film societies, charities, or borrow off acquaintances), begging friends of friends to come and be the cast and then getting hold of some editing software and basically putting the hours in. Anyone can do that. What I wanted to do this time, as I repeatedly told people, is scrape together a reasonable budget. A decent budget. One that will enable me to not only pay those involved, but hire quality equipment, feed everybody really well and get the film into film festivals in Edinburgh, Glasgow, London and beyond.

With this in mind, I set up my IndieGoGo page, wittered on Twitter and bothered all my Facebook friends. I then essentially went about my life. Within 3 hours I had $5 that I hadn’t had previously to go towards making my film.
The way crowd-funding using a site like IndieGoGo works is by offering perks for donations. You don’t just pledge donations- you help out the film by buying unique gifts. These include experiences like a violin lesson, an extra part in the film or invitation to the Glasgow premiere. They include tangible things like photographs and DVDs. Sponsorship deals like advertising space on the DVD and a free website video. And pretty cool gifts like being credited as an Executive Producer and getting your name in the credits.

Fast-forward to tonight and I have 9 days left of my IndieGoGo campaign. I have raised a fantastic $1250 (just under £800) to make my film with, which is utterly spectacular. All my wittering and twittering has also brought my endeavour to the attention of a helpful script editor and BBC camera man, both of whom have pledged their services for when the time comes. It has also secured me the use of a free camera, dolly, lights and jib (that’s a funky camera crane to those not in the know), which frees up about £400 of the budget that can now be spent elsewhere.

So I’ve got nine days left to raise any more money I can scrape together. My target for now is $1600, which will give me a cool one thousand pounds to make the film. So I’ve got $350 left to raise, in the next nine days.

Please consider donating to “Falling for Fitzgerald”- it’s a bleak comedy about a woman on the wrong side of twenty-five and unhappy with the way her life is going. In order to get a handle on things like her shit job and her boring life, she decides that becoming obsessively attached to one man can solve all of her problems…

If you’d like to find out more about “Falling for Fitzgerald”, please visit www.amyhawes.com or email me at amyhawes@live.com. To donate, please visit http://www.indiegogo.com/Falling-for-Fitzgerald
Thanks for reading!