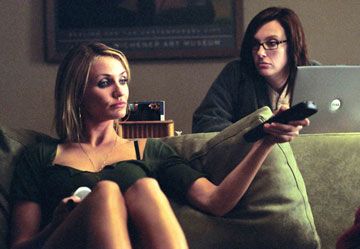 Between Inception, Rich Hall’s dissertations of the Dirty South and Westerns lost, and almost every other film I’ve watched in the past month, I needed a break. A break from men.

Have you ever heard of the Bechdel Test? Developed by a woman named Allison Bechdel to gauge the participation of female characters in Hollywood film. The test – also known as the Mo Movie Test – is based on three simple questions.

Needless to say, there are disturbingly few Hollywood films that meet these criteria.

You may not find this useful, and are perfectly entitled to feel that way. However, as I watched In Her Shoes and pondered Hollywood’s collective epic test fail, my boyfriend sat down to watch for 5 minutes. There is a scene where Rose (Toni Collette) is at the Sixers basketball game with her boyfriend, and he gets into a conversation with some guys about the game. The second this scene ended, my boyfriend turned to me and, voice laden with sarcasm, said, “Well, that was a realistic representation of men discussing sport.”

Frankly, I find it heartening. This moment of trepidation about representing conversations between men is reminiscent of Jane Austen, who openly admitted that she did not write conversations between men because she has never heard one. If anything, this scene proves that what men say about sports is of little consequence to most women. Sweeping generalisations aside, this scene demonstrated more about the boyfriend Simon’s character than it failed to illustrate about men through language.

Speaking of men, I mentioned Inception. At first, I thought, “Two women and five men isn’t such a bad ratio,” That is, until I counted properly. Marya at Cinema Fanatic has posted a few times recently about DiCaprio’s performances in Shutter Island and Inception, noting that his part of what makes his performances so excellent are his portrayals of characters tortured by guilt and the death of their wives. Mathilda Gregory has a different take on this. In her latest article entitled, “Want to give your male lead some depth? Give him a dead wife,” she postulates that the dead wife trope is a cheap trick that provides a shorthand for creating “interesting” male characters.

Inception is an intelligent, thoughtful film that self-reflexively challenges ideas about narrative. But sometimes it seems like enjoying popular culture and being a feminist seem mutually exclusive. I don’t want to have to turn my feminism off in the theatre just so I’m not niggled by the fact that instead of being treated as human beings with their own unique subjectivity, women in films are cheerfully shoved into white goods just so the hero can react to it with his best-ever acting and broody, brooding brood-face.

I guess that pretty much sums it up.

Do your favourite films pass the Mo Movie Test? Or is it plagued by moody widowers?