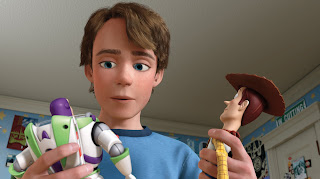 I’ve written about 3D filmmaking before. Now that almost 5 months and a summer of 3D blockbusters have elapsed, I figured it was time to revisit the subject.

If you’re a UK film-fan, you are probably aware of leading film critic Mark Kermode’s take on the topic. (In short: he hates 3D.) Recently, he made a video entitled Did Somebody Actually Make a Good Case for 3D. This week, he received a response from Pixar’s stereoscopic supervisor.

Much of Bob Whitehill’s (aka The 3D Guy) response focused on aspects of the 3D in Toy Story 3 that I had been mulling over since Kermode’s first video about the film. I watched the film for the second time yesterday, and now feel prepared to discuss it.

Does forgetting that you’re watching a 3D film mean that,
1. There was no point in it being 3D; or
2. The use of 3D have enhanced the film by doing exactly what it was meant to do? 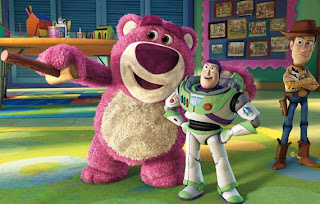 Lee Unkrich has said that, “In my mind, as a film-maker, the moment an audience is paying attention to the 3D effects, I’ve failed miserably as a film-maker and a storyteller.” That is a bold statement, particularly when dealing with a mode of filmmaking that is notoriously gimmicky and distracting.

Even Pixar’s previous film, Up, was not safe from Kermode’s scrutiny. He said that the 3D in Up draws attention to the floating detritus and away from the story. Alice in Wonderland suffered from the same visual interference. “You do run the risk with 3D of adding an extra layer of distraction,” says Unkrich, “so we use it in a very understated way.”

Understated is the word that best describes the use of 3D in Toy Story 3. Many have referred to the use of 3D in the film as, “pointless”. If you don’t notice it, you might as well get rid of it, right? This definition suggests that there is a fine line between 2D and a well-constructed, understated use of 3D. The delicate touch with which 3D is added to Toy Story 3 is seamless and, for the most part, goes unnoticed in much the same way as an excellent score, practised camera move, or discreet scene transition might. 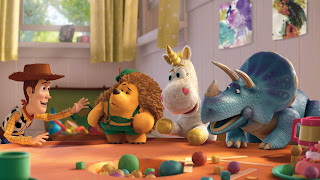 The 3D in Toy Story 3 was carefully crafted to, “think of the screen as being a window into a world, seeing it in 3D as we experience life, and leav[ing] the gimmicks to other people,” (Lee Unkrich). In this film, unlike most 3D films and trailers I’ve seen, planes are at a comfortable distance in order to create a perspective that feels natural. Rather than having your eyes forced onto certain points on the screen, you are watching as a casual observer, often standing amongst, in front of, or behind the characters. Your eyes are not jolted into place. Instead, just as your eyes are naturally attracted to the lightest part of the screen in 2D images, the 3D in Toy Story 3 gently guides your eyes across the screen, creating depth without forcing the closest objects into the forefront of your vision. You can see the dimensions as you would see them if you were standing within the scene.

This also extends into a more stylistic approach. For example, when Buzz is picked up and shoved into a toddler’s mouth, and pounded against some hammering blocks, the slow motion and 3D merge in a first-person perspective shot that conveys the horror of the toys’ plight. 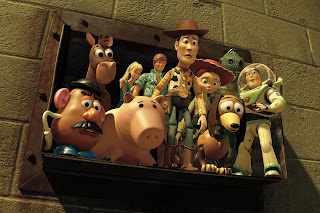 Filmmakers continue to find more ways to create a sensory cinematic experience. When done well, elements such as cinematography, lighting, colour, sound, and music, come together to produce an orchestrated experience that, when we watch and listen to it, feels organic. Though I have my qualms with 3D, there is no reason to believe that the 3D effects in Toy Story 3 do not enhance our understanding of the characters, the gravity of situations, and our emotional involvement with the characters. Unless you can find a way to break it down into chunks and define exactly which individual aspects influenced each of your reactions or feelings, we cannot say for certain that the 3D did not make a significant contribution.

Further viewing for experts: This video from SoundWorks Collection on their involvement with Toy Story 3 encapsulates this argument with regards to sound.

Toy Story 3 – Sound for Film Profile from Michael Coleman on Vimeo.
(Continue reading for a transcript of Bob Whitehall’s letter to Mark Kermode.)

What do you think of the 3D in Toy Story 3? Where do you stand on the 3D debate?

At the studio we work very hard to find the sweet spot between comfortable 3d and one that is rewarding and different for the audience. The way we approach it is this: when you are watching one of our movies you are rarely consciously seeing the lighting, or thinking about the costume design, or the camera’s focal length. These are all things that combine to make the film a richer, more impactful experience but are not at the foremost of your thoughts at the time. For instance, the thrill of John William’s score at the opening of Star Wars is a masterpiece and pulls you into the movie, but rarely during the film are you actively listening to the score. It’s working on your subconscious to make you more scared, sad, excited, or whatever may be the storypoint of the scene. Not that our 3D is in the same league as Williams’ genius, but that is what we hope the 3D is doing for our audience. An occasional moment of “Wow”, but an entire film of enhancement. Now, whether or not you feel that 3D adds to the overall experience is certainly something we can debate; but, that you forgot you were watching 3D for much of the film is, in some regard, our goal of maintaining the focus on the story.