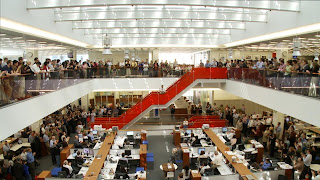 The pen is mightier than the sword, but is the printing press greater than the CMS?

Page One: Inside the New York Times opens inside the mammoth New York Times printing press – a sight to behold for life-long online journalists. Alongside it, the stately monolith of the New York Times headquarters located in Midtown Manhattan is a statue to the legacy of the iconic daily newspaper. In the face of open access to information, new authorial voices online, and a decline in advertising revenue, online presents a new apparatus of accountability in journalism.

When, in January 2009, The Atlantic’s Michael Hirschorn published an article citing the end of days for New York’s sacred text, the newsroom was rocked at the insinuation.

As documentarian Andrew Rossi worked on a documentary about Web 2.0 for HBO, the article acted as a catalyst for a conversation with New York Times reporter David Carr about the media’s utopian future. Following the breadcrumbs, Rossi stumbled into a legacy.

“The conversation I was having with David Carr suddenly took this sharp turn toward a conversation about what the future for legacy media would be, and what was going to happen to the Times,” says Rossi. “I realised that following his story through this change of digitisation and technology could be really fascinating. Drawing the story out towards the future of journalism and what’s happening to newspapers and what the implications are for those people was another approach, versus, for example, following an entrepreneur who is starting their own company and has a sort of wide-eyed take on everything.”

Rossi acted as the Times HQ’s fly on the wall, working to emphasise verité. Taking us behind the news desk with former crack addict and veteran journalist David Carr and blogger-turned-reporter Brian Statler during a turbulent year of leaks and take-downs, it’s a personality-driven piece on the now-threadbare existence of the world’s best-known newspaper.

In the face of Twitter reporting, online news aggregators, and WikiLeaks, will the New York Times become, as David Carr inquires of the iPad, “a bridge to the future or the gallows”? “I think that [Gawker and The Huffington Post] are websites which have a lot of value add for their readership. Maybe the Huffington Post has a lot of people in democratic politics who look to it on a regular basis, but I don’t think they’re doing any investigative pieces that are changing the world.”

Having captured the revelation of WikiLeaks from within the newsroom, however, the journalistic process takes on a new set of parameters online. Is it unedited journalism, or a simply a source? “WikiLeaks was something that nobody could have predicted would become such a huge story and really dominate the conversation,’ says Rossi, ‘not only in the media, but also in geopolitics. That was definitely a surprise, and a wonderful one, because it’s one which I think really crystallises all the themes in the movie.”

The Times subsequently partnered with WikiLeaks to release a series of daily headlines. This is where free information and the arbiters of what’s news collide.

The proliferation of news media has blinded us to the sheer amount of new media content that is produced by mainstream sources and aggregated online. We’ve seen how legacy journals have fallen in the hands of malfeasant executives, but here the New York Times represents a crew prepared to go down with its ship, which in turn refuses to sink. Can the news world strike a balance between strong investigative journalism in the face of free, to-the-second online content?

“The New York Times do still set the agenda,” says Rossi, “but I think that it’s very important for people to be educated news consumers. People can access original documents and can fact-check stories that they see themselves. They don’t have to be a slave to one piece of paper that gets printed on a daily basis. 24 hours a day, they can write comments and talk back to the paper.”

Agenda-setting is no longer a one-way street. “I think something that we learn [in the film] is that it’s a 2-way street, and there’s a way to guide the global conversation on different topics that accommodates counter-voices.”

In a culture where everything is perceived to be free, are we ready to learn the cost of losing the New York Times?

Page One: Inside the New York Times is released Friday 23 September and screens in the UK throughout September and October. Out on DVD 14 November. Find screenings in your area here.

You can pre-order Page One on DVD or stream it online through Dogtooth.tv by clicking on the player below.

A version of this feature is published at the Spectator Arts and Culture blog.