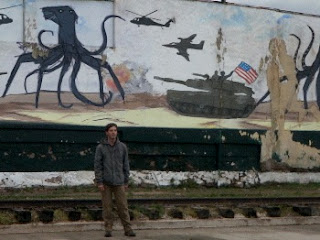 Independent filmmaking is a fickle business. With the recent closure of the UK Film Council and huge budget cuts for the arts, this is a fresh wound in the British film industry model. Funding is hard to come by, and in an industry where low and micro-budget films cost anything from £26,761 to £990,797 (according to UK Film Council, 2008), newcomer Gareth Edwards sagely remarks, “you say the words ‘cheap’ and ‘potentially commercial’ to producers, and you’ve hit the jackpot.”

Gareth Edwards is the little fish in the big pond of post-apocalyptic sci-fi. Despite its low budget, guerrilla filmmaking style, and grungy CG aesthetic, Monsters has had a snowball year of growth, buzz, and – eventually – hype. “Put it this way: you can’t play in the filmmaking equivalent of the World Cup Final without embracing the Hollywood machine,” says Edwards. “It’s not a business model to emulate forever…. it’s more like, it’s great you can make your debut film this way, and then maybe you’ll get a better opportunity.”

Monsters is part indie sci-fi, part road movie, and potential CG cult sensation. Fascinated with beginning where most apocalypse stories end, the director set Monsters post-post-alien invasion. “I found the idea of nobody really reacting anymore interesting. If War of the Worlds was September 11th, then this film would be like Afghanistan,” he says. Taking place six years after the crash of a NASA probe carrying extra-terrestrial life forms which scattered its alien cargo across Central America, the film follows charming photojournalist Andrew (Scoot McNairy), who is charged with the safe return of his editor’s daughter, the reserved, pixie-haired Samantha (Whitney Able) to her fiance. Their attempts to leave the quarantined zone before the aliens’ annual migration are thwarted and they must make the long pilgrimage home on foot.

The first time filmmaker took a crew of four (himself, two actors, and editor Colin Goudie), on an arduous shoot through Mexico, Belize and Guatemala: a huge, but ultimately lucrative, challenge. “I often think, “What would I have done if Vertigo hadn’t given us the money? The reality is, I’d have financed it myself…. but if it had been my own money, I would have called it quits at some point and had a break – then, inevitably, never returned to it. But I couldn’t afford to ruin it, I had to deliver what I had promised.”

Produced by Vertigo Films, the exact budget has been a subject of debate, but is generally believed to be under half a million pounds: little more than travel expenses, equipment, and wages. “The effects budget was nothing, because that was me,” says Edwards, “and I don’t know the exact budget. The reason I don’t know is that because most of the money went on wages. It’s in the low six-figures, I would guess.”

The potential of high returns on low budget films with Hollywood-standard visual effects is proving to be a promising market. Hollywood visual effects specialists Colin and Greg Strause recently made a move into directing – first as directors of Aliens vs Predator Return (2007), and then with their own low budget feature, Skyline (2010). With an estimated budget of $10 million, the film grossed over $21 million, making the Brothers Strause one of Hollywood’s success stories of 2010. By comparison, Edwards’ Monsters has an estimated budget of $800,000 and, having grossed $229,192 so far, was a quiet hit at a number of film festivals. A slow-burner, it is becoming an indie hit rather than a box office success.

Frustrated with his lack of practical education at film school, Edwards, instead of pursuing life as a filmmaker, made a similar side-step into computer graphics. But that’s not where his ambitions lay. “Doing visual effects for a living is like being a gynaecologist. When you do it every day at work, it doesn’t turn you on any more.” This career move proved a neat segue back into independent filmmaking, cementing a certain element of his aesthetic that is a prevalent feature in Monsters. “I really hate watching Hollywood films where you can tell they’ve made lots of effects people break their backs to do these shots, but the final emotional impact is nothing. So it was really important for me to put the record straight: what I did with this film is not technically groundbreaking, but I hope the choices that were made were to be bold and throw away visual effects, not make a big deal of them.”

Whimsically dubbed “Brief Encounters of the Third Kind” in the editing suite, Monsters’ strength is its emotional depth. A couple in real life, Scoot and Whitney fit the bill for the lead characters, but he still needed convincing. “The chemistry is so important. There needed to be a real chemistry between the two people, and I didn’t want to leave it to chance that it wouldn’t be there. I didn’t know them then, and I didn’t want to risk it.” Despite his initial disappointment with Whitney’s good looks, he says, “I didn’t want to have her because it’d be like a Hollywood movie, and we were trying to fight in the opposite direction of that. So, I said all this, and they basically flew me over and I slept on their sofa for 5 days and got to know them… [Whitney]’s not the person you think you’re going to meet, and she was really keen to do something that showed that as well.”

And Whitney wasn’t the only one with something to prove. In establishing himself as a director, Edwards was very focused on his audience. Despite touring film festivals around the world with a film about two Americans, he hopes for success at home. “It’s really interesting because territories, nations, countries, they do sort of have their own personalities,” he says. “I’m obviously British and I feel like I know the British personality, so if I can’t make a film that people in Britain like then I’m in trouble… I’m more nervous about how it does here than the rest of the world, because this is the [personality] I’m supposed to know.”

His British sarcasm is a mainstay in all of his press appearances, but his passion for film and aims to make an organic, off-beat, yet appealing picture is most memorable. Having
been through the guerilla filmmaking process, his perspective is clear. “What’s great about it is that if everything completely goes wrong, I can do it again. It feels like a really nice safety net,” he says. “It’s a young person’s game, making a debut film. It’d be hard if you had kids and were settling down, it’d be a big financial risk.”

“I do feel like we had something to say about how this film was made and I wanted it to help other people who want to do something. Make them think, good, there you go, see. I can go off and do that,” says Edwards, who is clearly an advocate for first-time filmmakers. His advice? “Don’t be someone who is going to make a film. It sounds so obvious that it sounds stupid. But really, listen to these words and think about it. Be someone who is making a film.” After years in visual effects, it was a lesson hard learned for him. “It’s so easy to put things off, I did for 10 years.  I was “try”ing for a long time, and really what I was doing was putting it off because I was afraid of failing. By sheer accident I got into a situation where dates were put down on paper and I had to do it.”

Despite recent commentary decrying the abolishment of the UK Film Council, Edwards has pioneered a movement for low budget films with high budget aesthetics. Focusing on story and character over flashy images, it hasn’t always proved popular, but is a promising start to a new grassroots approach to filmmaking that will no doubt attract and inspire a younger generation of filmmakers. Moving away from the Film Council-funded British cinema of Stephen Frears and Tom Hooper (director of Britain’s biggest Oscar-bait of the year, The King’s Speech), a revival is in action that has the potential to become Britain’s new cultural cinema. Forget expensive blockbusters, homegrown competition is a springboard model for the British film industry’s future.