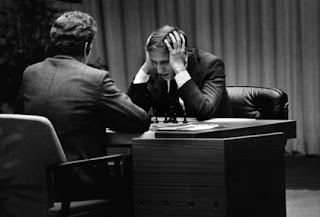 Documentarian Liz Garbus began a personal journey to know a man on the day of his death. His name was Bobby Fischer. “I first became interested in the story on January 18, 2008. A very precise day because I was reading Bobby Fischer’s obituary.” From that moment, she became obsessed with making a film about one of the world’s all-time greatest chess players.

“The film follows the story of Bobby Fischer and the great match of 1972 when he, a lone American, took on the Soviet Tzars of the sport of chess. The Soviets had been dominating the sport for decades and it was the midst of the Cold War, so this match took on enormous importance. But the film also explores the psychology of Bobby Fischer and the weight of celebrity and the mantle of being a genius and the toll that can take on an individual.”

Fischer was almost as famous for his anti-semitic rants in the last decade as he was for his agility on the board. A search on YouTube, Garbus says, will find hours of Bobby’s raving. But Bobby Fischer Against the World takes a step back from modern lore and buries deep into his past to find the real Bobby Fischer. “I think when you listen to someone for 5 minutes rant about the United States or rant about the Jews you would be disgusted and angry, but I think when you listen to it for 200 hours, as we did, you understand that it’s the raving of somebody who is not in full control of their faculties. It’s actually a tragedy what happened to this great great mind.”

Garbus brings back the ‘old’ Bobby, one whose charisma and keen wit on talk shows as a 15 year-old US Chess Champion have been long since forgotten. Reviving his life story along with professional and personal friends from his life, Garbus captures the poetry of chess, a devotion to a game, its infinite complexity, and its profound effect upon one great mind. “I don’t think that the film is for chess fans or not for chess fans. The film is about Bobby Fischer, and Bobby Fischer was one of the greatest chess players who ever lived – to give a little insight into chess and what made Bobby such an extraordinary player.”

Bobby Fischer Against the World is released in UK cinemas on Friday, 15 July.