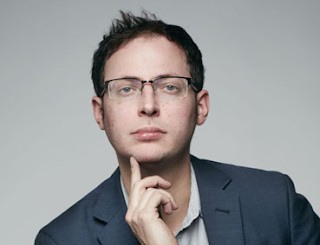 On Tuesday morning, the day of his sold-out event at the Edinburgh International Book Festival, Nate Silver was on the front page of the Scotsman newspaper. A demonstration of his influences as a political commentator, the event’s chair seemed to suggest. A coup for his PR company, I mumbled cynically.

Unfortunately Nate Silver doesn’t see much hope for the Yes campaigners in the Independence Referendum. And he tends to be right about these things, having correctly predicted the outcome of the 2008 American election in 49 States in 2008, and in all 50 States in 2012.

Silver’s success has largely come around in the political sphere, particularly with the 2012 election and the addition of his blog, fivethirtyeight.com, to the New York Times. He has since, very recently, moved on to ESPN where he can grow the brand and cover topics including politics and sport, and beyond.

The event took the usual form – a Q&A with the chair followed by some audience questions. He spoke about people’s trouble with thinking probabilistically, measuring sentiment through polls and how to reduce the noise, some typical outcomes from particular types of political moments (elections vs referendums, for example), and how data tells a story.

He also spoke about the partisan nature of politics in the US and one important caveat for finding out someone’s true feelings about the data that disproves their notions: asking them to put their money where their mouth is.

It was an insightful event, particularly having not yet read his book The Signal and the Noise. His success is in many ways surprising, but a welcome antidote to the current media trends towards soundbites and lack of grey area in media reporting.

Silver’s ability to speak plainly about the media’s stake in a close race, polemics, and tendency to over-represent anomalies could be instrumental in increasing media literacy – and that, for my money, is far more valuable than calling the election first.