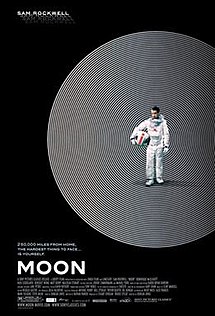 Moon is a haunting sci-fi thriller starring Sam Rockwell as mechanic Sam Bell, stationed alone on the far side of the Moon at a LUNAR complex that provides Earth with hydrogen power. Kevin Spacey voices his companion, or “assist robot”, GERTY.

Sam’s 3-year contract will soon expire and he will be able to return home to his wife and young daughter whom he has never met. When he has an accident on his way to repair a harvester, though, he soon discovers that there is more to the LUNAR mission than he had anticipated.

It is difficult to say much about Moon without giving away the startling and complex plot, suffice to say that it is superbly drawn and executed with finnesse. Rockwell’s performance is excellent, and Kevin Spacey’s reassuring robotic lilt keeps you guessing whether he is friend or foe.

Though it did not receive any Oscar nominations, Moon was widely considered as one of the films most snubbed by the Academy Awards. The film is currently widely available for rent and purchase.