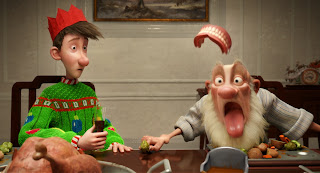 Aardman studios lays the first claim to the Christmas cinema season with CG-animated Arthur Christmas. Voiced by James McAvoy, he’s the hapless young son of Santa (Jim Broadbent) and brother to the head honcho’s militaristic heir, Steve (Hugh Laurie). All seems to have gone well this Christmas Eve – Santa Malcolm’s 70th hi-tech mission – but after the festivities of the evening’s rush present drop are complete, it transpires that a child has been missed.

Co-opting Grandsanta (Bill Nighy) along with his trusty old-school sleigh and reindeer (Dasher, Dancer, Prancer, umm the one with the white ear, and you, and you), the family eccentrics are joined by an enthusiastic gift-wrapping elf, and so begins the treacherous sleigh-ride as the rag-tag amateurs try to reach poor Gwen with her shiny new bicycle before the Christmas magic is lost.

Beautifully animated with some intricate sequences and a dash of Aardman humour, it’s a safe family-pleaser with the requisite all-star voice cast and smattering of interesting accents. While it references Aardman’s main man Nick Park, however, it channels close to none of his trademark humour or visual idiosyncrasies. Substituting the studio’s famed jocular spirit for something far more vanilla, its international aspirations are at the expense of British charm. A cheerful 3D frolic for the family, but not much more.

Arthur Christmas is released in UK cinemas on Friday 11 November.