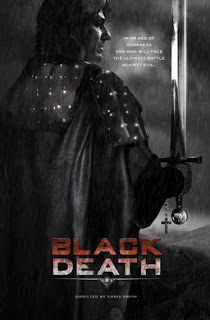 Black Death, from British director Christopher Smith (Triangle, Severance) is a bleak historical drama set during the 13th Century.
As the bubonic plague sweeps across the medieval villages of England, Ulrich (Beam) and his men seek to uncover a demonic necromancer rumoured to live in a Godless village untouched by the disease. He takes Osmond (Eddie Redmayne, The Other Boleyn Girl), a young monk, as his guide.
Death is endemic throughout, poignantly protracted with fevered, blood-spattering gore.  Switching at will from dramatic fight scenes to visions of grief, the film is at once an historical thriller and horror.
It is difficult to reconcile the patriarchal archaism of the film with a modern reading of history. Although Smith creates a dichotomy between the vengeful Christians and the Godless pagans they seek to destroy, both theologies are portrayed as deeply flawed, abject, and moral-less. Carnage is the currency by which righteousness is enumerated.
Tense but grim, Black Death is as dark as the plague and as joyless as the period in which it is set.
Black Death is on limited release in the UK from Friday 11th June.