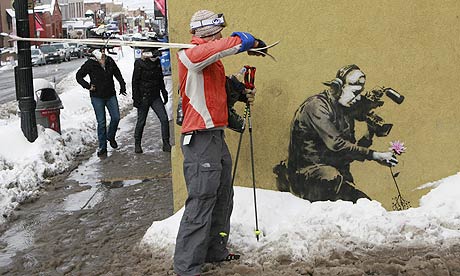 Exit Through the Gift Shop is a beguiling and at times bewildering documentary on the street art scene of the early naughties. Though the literature I had read led me to believe that it was about the notorious street artist Banksy, the film instead takes you on a fantastical journey through the life and times of a Frenchman named Thierry.

Cousin of Invader – a street artist whose placement of Space Invaders creatures in public places was his calling card – Thierry is a former shop-owner and compulsive cameraman. Thierry’s obsessive use of recording equipment led him into documenting the every movement of many key players in the street art scene. Invader and Obey (Shepard Fairey) eventually led Thierry to Banksy, who allowed Thierry to film his creative process, join him in setting up his projects, and inadvertently made a monster out of him.

Full of frenetic energy and narrated by the enigmatic Rhys Ifans, the film combines much of Thierry’s original footage and on-camera interviews with Thierry, Banksy, key street artists, and people who became involved with Theirry’s all-encompassing artistic madness.

It is quite a journey to undertake. The film is perfectly timed and measured so that we learn about Thierry, trust him as Banksy did, then recoil in horror as his manic ambition sets in and overtakes the scene. Thierry used to follow Banksy around like a young pup, wide-eyed and full of enthusiasm. Seeing the error of his ways, Banksy now regards Thierry as a once loveable pet gone errant – still obedient, but taking the game far beyond its natural limits.

The film premiered at Sundance Film Festival in Park City, where 5 works attributed to Banksy appeared days before the event.