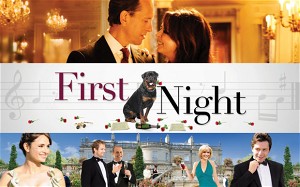 In the film industry, sometimes the only way to get your movie made is to fund it yourself. First Night is one such film.

Starring Richard E. Grant, Sarah Brightman, and Mia Maestro (yes, really) in a similarly self-serving stately home opera production, this is a film custom-made for the hoity-toity class. Enter a rag-tag (as far as the term can apply) bunch of opera singers from various backgrounds gather at Sir Adam Somethingorother’s (Grant) estate, employed to put on an outdoor performance of Mozart’s Così Fan Tutti. Armed with enlarged egos and insecurities, all manner of rehearsal-related shenanigans ensue.

Having had the distinct displeasure of watching this truly terrible opera drama twice, I can confidently issue a one time offer for an ear-shattering scream in place of a ticket to this monstrosity.