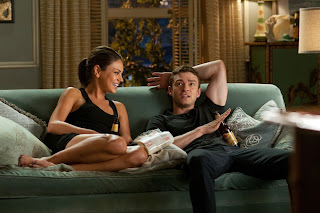 As coital pleasures replace a date-night dinner, smart snark supersedes sincerity in the unambiguously titled Friends With Benefits. Director Will Gluck moves from the sex games of a quick-witted teen (Easy A) to twenty-somethings teetering on the edge of friendship and love. More charming in actions than in words, the film is kick-started by peppy New York recruiter Jamie (Mila Kunis) as she strikes up a fiery camaraderie with web-savvy Los Angelean Dylan, whom she’s head-hunted for the role of art director at GQ. Take the Sex and the City lifestyle, subtract the dating games and you’ve got a Harry and Sally for the internet meme generation.

In lieu of unpredictable plot twists, Gluck whips up every metropolitan delight from hot dogs on the roof to flash mobs at Grand Central. Reviving the authentic New York for an LA audience with a cheek full of tongue, its self-aware wisecracks on all but absent rom-com cliches give way to flashes of sincerity. A few round-about justifications must be made as it ridicules the same cutesy clichés that it perpetuates, like making fun of Nicholas Sparks romanticism as it attempts to emulate its biggest gestures without losing considerable street cred. But when self-awareness meets caricature, a pinch of irony goes a long way.

Timberlake’s hapless yet agreeable commitment-phobe is far outshone by Kunis’ self- deprecating charm in this tangled web of limbs and emotions. Their personal quirks are backed up with family background as they duck an weave around relationship territory, but ultimately, it’s too smart for its own good. Over-selling fringe characters like Emma Stone’s John Mayer-obsessed ex and a cameo from snowboarder Sean White, the film hints at past lives that cost a hefty suspension of disbelief. However, bringing fun set-pieces of video-gaming parties, work photo-shoots and flash mobs into an otherwise typical existence allow its elements of satire and send-up to jibe without judgement.

Though it knows itself all too well, Friends With Benefits has canny appeal, making it the oddly enticing summer rom-com of the year.

Friends With Benefits is released in UK cinemas on Friday 9 September.