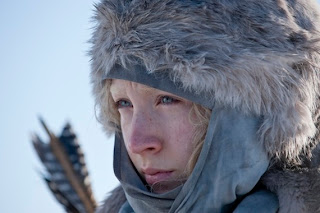 Atonement director Joe Wright makes a side-step into assassin thriller with Hanna. Starring a cute-but-deadly Saoirse Ronan, she’s been raised by CIA-defector dad Erik (Eric Bana) in the tundra to hunt, fight and kill. The perfect assassin, Hanna is dispatched on a mission across Europe and must kill or be killed by pristine operative Marissa (Cate Blanchett).

Wright drops us directly into survival mode with a visceral film that encompasses boreal snow to African desert, but it’s the acute sensory moments – the soundscape of Europe – that lends a resonant jolt to proceedings. Though somewhat overlong and lacking ingenuity of plot, there’s plenty to be discovered in this swift action thriller. Hanna’s temporal mission is a thrill of circles, tunnels, seasons and elements that feels like being plunged into a Swedish rave taking place in a futuristic rabbit-hole. Wright may lag in the race to the finish, but Hanna certainly sets the blood pumping.