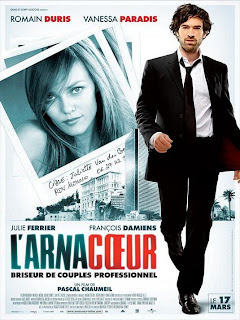 Before watching Heartbreaker, I read an article in the Sunday Times’ Culture section about the film, crowning it as something of a king of mediocrity in the French romantic comedy market. (Unfortunately I cannot link it, as it is pay-only content). While many of its points were valid (Paris as the city of love, French as a romantic language, beautiful actors and actresses), it was almost insulting to assume that Amélie – though fantastic – was the be-all end-all of this nationalistic genre. Incidentally, I’ve enjoyed more German rom-coms than French in the past two years.

Heartbreaker is a rom-com with a bit of a difference. The story revolves around Alex Lippi who, with his sister and brother-in-law, are in the break-up business. Hired primarily by stubborn fathers and concerned brothers, Alex breaks hearts with delicate aplomb. As his clients are women who are unknowingly unhappy, after a brief tryst he sends them back into the world with a sprinkle of joie de vivre.

Naturally, when he is hired to split up the beautiful, bold, and bourgeois Juliette van der Becq (a striking Vanessa Paradis), she proves indifferent to his charms. What follows is of your typical rom-com fashion, replete with the brushings of cold-shoulders, brushes with danger, and leaps of faith.

Paradis plays the tight-lipped Juliette with nuance, gradually melting her near-glacial disposition and adding hints of geniality as she warms to Alex. Romain Duris gives a good performance as the likeable and attractive Alex without straying into arrogance.

Despite some dated and frankly unoriginal references to Wham! and Dirty Dancing, the Heartbreakers is charmingly predictable with likeable characters and a good balance of silliness and sentiment. The subplot was woefully underwritten with a one-line pre-credit resolve. However, harking back to some classics such as It Happened One Night (though seemingly unintentionally), it certainly has moments of brilliance and an original concept.

Heartbreaker (L’Arnacoeur) is currently on limited release in the UK.