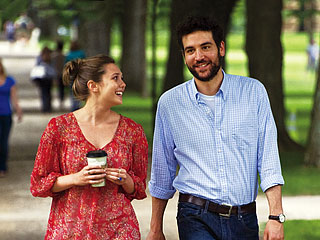 I’m dying to read Infinite Jest. But if what Liberal Arts would have you believe is true, that book will kill you.

Josh Radnor’s sophomore foray into filmmaking has a touch of Lena Dunham about it. Taking a leaf out of Zach Braff’s book (and Dax Shepard’s to come), the sitcom star has written, directed, starred in, and heck knows what-else’d Liberal Arts. It’s an easy comparison to make, but there is definitely a touch of Garden State in this story of an Ohio university graduate and book lover languishing in the admissions department of a New York City college.

The Midwestern undergraduate dream is alive and well for 37 year-old Jesse Fisher (perfect, right?) who makes a trip to his Ohio alma mater for the send-off of his favourite professor, Peter Hoberg (Richard Jenkins). There, he is reunited with his college self, allowing for a personal makeover/do-over and an opportunity to be the harbinger of wisdom for these 19-22 year-old minds. Minds, in particular, are provided by young love interest Zibby (Elizabeth Olsen), whose musings on life always hark back to a love of improv, weirdo shaman stoned-on-air Nat (Zac Efron) – the less said about him the better – and manic depressive Dean (John Magaro), who is, in this world, living proof that reading too much David Foster Wallace puts you in danger of art following life following art.

Nostalgia for a rose-tinted 4 year sojourn for reality is alive and well here, and is something with which most campus-educated film and book lovers can identify. However, like many a college paper, its themes are discussed at length and its metaphors over-stretched (I mean, look at the fucking poster), particularly in breathy conversations between Jesse and Zibby on the meaning of life and… well, Twilight. Early on, they exchange letters and share the enlightenment of Classical music in a sequence at once charmingly written and profoundly ridiculous.

What’s odd about Radnor’s devotion to the written word is that it seems to assume that the viewer hasn’t picked up a book in his or her life. He is eyed by the local bookseller, picks up a second book after the last page of a first, and has a number of profound-sounding (he assumes) conversations about literature. But not once does he refer to the author of the book that’s in his hand. An odd choice, and one that I found distracting. For a filmmaker to be afraid to share a love of books on film; to have a film forgiven its sins and become the go-to movie for the bookish, as High Fidelity has become for music nerds… Well, that’s a mistake for, as the genius Allison Janney’s character Prof. Judith Fairfield might put it, a mistake for “effette over-intellectual manboys”.

Like many of his peers, Radnor pokes fun at the tropes that his movie perpetuates, but we’re all, like his characters, better off for it in the end.