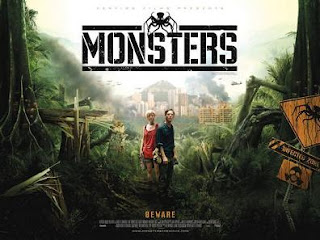 Gareth Edwards’ low-budget post-apocalyptic thriller, Monsters, hits UK cinemas after nine long months on the road at festivals from South By Southwest to Edinburgh. A brooding, even-paced road movie with a love story at its core, it takes place six years after a NASA space probe carrying extraterrestrial lifeforms back to Earth broke up on re-entry, scattering its alien cargo across Central America, where the creatures have now made their home.

We follow Andrew (Scoot McNairy) and Samantha (Whitney Able), a photographer and the daughter of his editor, as they attempt to make their way through the infected zone back to America when all other routes to their homeland are cut off. Shot in Mexico, Belize and Guatemala by a crew of four, the authentically dilapidated locations together with Edwards’ computer generated effects, which include the tentacled CGI creatures that seem to glow and pulsate with energy, give the film an atmosphere of serene gloaming. Unique, adventurous and hard-to-define, Monsters is guerilla filmmaking at its best.

Monsters is released in UK cinemas this Friday, 3 December.