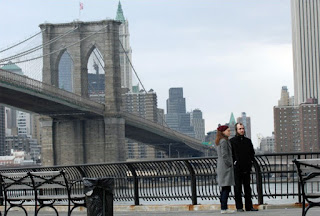 If New York, I Love You is a love letter to the city, one can only assume that it was written by Hollywood in an attempt to prove that New York is even more depraved, tasteless and full of pretentious douchebags than LA is.

The film begins much in the same way as its predecessor, with short films by different directors. Desperately seeking to portray the diversity and universal importance of the city, this commences with an amiable conversation between a Muslim diamond salesman and a Hasidic Jewish woman (Natalie Portman) comparing their religious views, ribbing catholics, and sharing a moment. It’s over-polished and self-indulgent, which sets the tone perfectly for the rest of the film. The few interesting characters who miraculously surface in this sea of vapidity are present for one 5-minute segment and never reappear.

The dialogue is an absolute affront to the written word, with speech so crass and unbelievably unrealistic that it is insulting that the filmmakers expect anyone to believe that any person on earth actually speaks that way. From Ethan Hawkes’ rambling chat-up-cum-tirade to the interior monologues that ring about as true as the term “friendly fire”, it’s hard to decide what is more crude: every word uttered in this 2-hour mess of a movie or the mishmash way it has been clumped together like cheap mascara on false eyelashes.

If the aim was to emulate the grace and beauty of Paris Je T’aime, New York I Love You is New York’s latest marketable stench by Paris Hilton to the city of Paris’ inimitable and timeless Chanel Number 5.

It’s crass, it’s boring, and its lack of structure makes you wonder how the city and its skyscrapers are still standing. I heart New York, but New York, I Love You? I loathe you.