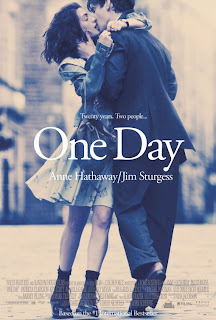 As you may recall, several few months ago I posted a rather tepid review of David Nicholls’ One Day. I stand by it but, curiously, the film was not as bad as I had suspected. I haven’t re-read it at the time of writing, so let’s see how they compare, shall we?

One Day takes place over the space of a 20-year friendship between one Emma Morley (Anne Hathaway), an academically accomplished Yorkshire lass, and the loveable yet drama-prone Dexter Mayhew (Jim Sturgess). We meet the pair in their often separate lives every year on 15th July – a concept that completely passed me by until the film’s release.

The first port of call is, inescapably, Hathaway’s take on the Yorkshire accent which, though surprisingly not disastrous, is completely inconsistent. One moment she’s an unremarkable middle-Englander, the next she’s stepped into an episode of Emmerdale. Regardless, her inability to look as clever as she does pretty despite a parade of terrible haircuts and wonky glasses prevails. Sturgess is excellent as the handsome, playful but mortally unstable Dexter. Gliding through the years like the victim of an unstoppable bender, he’s the true timeline of difficult years upon which the story rests.

The film, though, belongs to director Lone Scherfig, best known for her work on An Education. Partnered with Nicholls’ own screenplay, it’s a fitter, more pared down version of the book (which, at 400 pages instead of 250, was often interminably heavy on the “oh look he’s gone alcoholic” moments). Edinburgh, London and, indeed, Paris glisten with the Scherfig sheen of cinematic nostalgia, adding sentiment to overwrought emotional scenes. One cannot escape that this is an story leaden with the disappointments of ageing, lost potential, and the sheer strain of human relationships. Having a visual key to the pair’s ability to cling to one another through the years holds more true on screen than on the page. With a commendable sense of timing and a fantastic eye for locations, Scherfig’s double decade is consistent and, particularly when reaching the noughties, surprisingly accurate.

A stand-out performance from Rafe Spall as Emma’s hapless mid-way boyfriend Ian brings the true embarrassment of age. His bindingly sweet but slightly useless wannabe comedian beats out the radiant Patricia Clarkson for fringe character of the film. All players give good performances despite miserably drawn out disappointments and the film’s veritable buffet of endings.

Beter suited to screen than scroll, One Day is uncomfortable viewing but really rather worth a watch, actually.