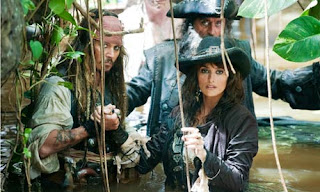 Stranger Tides brings tidings from strangers in this extension of a 1-part turned 3-part franchise, now pitted to carry on into its sixth instalment of the saga. Rob Marshall steps in to take the helm as director, as Johnny Depp continues his reign as the titular Jack Sparrow. No longer legend for his captaincy, we find Sparrow in London amidst the largest collection of known British actors outside of Harry Potter. After rescuing first mate Gibbs (he’s the one who slept with the pigs) from hanging under Sparrow’s name, our swaggering swashbuckler discovers there’s a new Jack in town.

Meanwhile an arms race is taking place between the Brits (led by Geoffrey Rush’s now peg-legged Barbossa), the Spaniards, and big ol’ Blackbeard to find the Fountain of Youth. Pretty self-explanatory, their motives and maps are laid out in a series of hops back and forth from exposition to rehashed sword-fight and chase sequences through the streets of London. While Jack’s runaways are more Austin Powers than Bond, the swift swish of metal is far preferable to Verbinski’s interminable distraction with ship battles in parts 2 and 3. It takes a long time to get to the captain crossover and corrupt bargaining that the first film did so well, with a race to the finish opposed to a tactical playoff. But, warming up to a reunion between Sparrow and Barbossa, it’s the archival camaraderies that bring out the best in the remaining key characters. It’s in this unlikely union you’ll find most of the laughs.

Penelope Cruz and Ian McShane team up as Sparrow’s ex-lover Angelica and evil buccaneer Blackbeard, though her needy deception and his one-note barbarism don’t liven up proceedings as much as Will and Elizabeth’s foolish frivolities have in prequels past. In a despairing attempt to plug the gap, too much is made of an attraction between a random mercenary and mermaid – by the by, a depiction of the mythical creatures is too close to a Lynx advert for comfort, and the key to a center-piece so pointless that it’s almost a relief that CG was similarly cut and plugged with slow-searing 3D effects.

Hingeing heavily on Sparrow’s well-documented improvisation, many of the set-pieces are fun and nimble, though frustratingly hampered by needless 3D which knocks the pace of the action sequences. Hans Zimmer’s ever-excellent score pulls together all the rogue threads, keeping well within the range of the first film and injecting a vigorous dose of fun. Restrained and keeping convention, Pirates 4 is far from heading up the franchise, but remains a solid addition to the fleet.