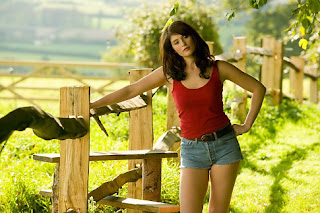 This review was originally published at Venus Zine


Tamara Drewe is Stephen Frears’ film adaptation of an adaptation. Based on the graphic novel and weekly Guardian comic strip by Posy Simmonds of the same name, the original Tamara Drewe is in turn a modern take on Thomas Hardy’s nineteenth century novel Far from the Madding Crowd.

Set in England’s small-town countryside, the film is based around a writer’s retreat run by crime novelist and serial adulterer Nicholas Hardiment (Roger Allam) and his devoted wife Beth (an unnervingly excellent Tamsin Greig). One guest is a bumbling American biographer named Glen McCreavy (Bill Camp), who works his way into proceedings, along with the handyman and local farmboy Andy Cobb (Luke Evans). Wreaking havoc upon the village, along with a rogue dog, are isolated teenaged neighbours Jody and Casey.

Tamara Drewe, unduly billed as the village protagonist, is not too far from the Maddening Crowd at all. Played by Gemma Arteton, she is frustratingly sidelined with a mere fraction of the screen time. Arriving around 15 minutes in, and not introduced until later, the film hinges on her being misunderstood. Drewe’s personality is dissected by the villagers from a great distance, based upon memories of her as an unhappy, big-nosed schoolgirl. Having left the village years earlier following the death of her mother, Tamara returns with a new nose and new-found confidence. As farmboy Andy was born in her old home, they are inextricably linked. With nary a batted eyelid, he is quickly in the palm of her well-manicured hands. A journalist, Tamara plans on selling the house and moving on. When she interviews the drummer of the latest pop band, however, she winds up bringing him home (much to Jody’s dismay) and finding that a peaceful life of writing was what she was looking for all along.

During her tryst with drummer Ben Sergeant (Dominic Cooper) he proposes but cannot stand small-town life. They soon move away to London, and Jody begins to meddle by sending provocative emails from Tamara’s account. Upon Tamara’s return home, she engages in an adulterous relationship with Nicholas, forcing Beth and Glen closer together and the rest of the village apart.

The film’s strength lies in its casting, with an amazing ensemble of actors who all shine in equal measure. Luke Evans is the only let down as Andy, a two-dimensional workman whose eyes are set on Tamara and never flinch. Tamsin Greig plays the wronged wife as both strong and weak with class and originality. Cooper’s tough demeanour hides a soft spot that Jody taps into with her fame-obsessed rigor. The characters play off one another in a game of power and lust throughout that never feels contrived.

Ultimately the plot lines are stretched until they begin to fray—much of that is told through expertly captured glances and love games that are, at times, over-explained. However, Tamara Drewe is an entertaining parochial drama with its heart in the right place.


Tamara Drewe is released in US cinemas on Friday, 8 October.