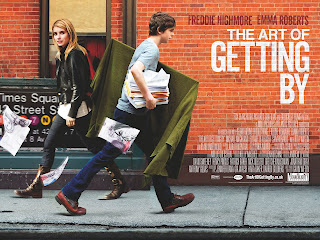 The Art of Getting By is indie film in a straight-jacket. Freddie Highmore returns to the screen as George Zinavoy, a fatalistic 17 year-old with a chronic lack of motivation. Preferring cultural pursuits like reading and painting to doing homework and preparing for college, he’s the weird trench-coated figure you never got to know at school… with, presumably, better bathing habits. (Oh, and sit tight, the reason for the ridiculous surname will be revealed later.)

When he meets girl-next-door Sally (Emma Roberts) on the roof and takes the fall for their on-campus smoking habits, they become friends and – yes, well done – totally fancy the pants off of each other. Her friends think him a curiosity and her Mum’s a bit of a hussy, so it’s the perfect recipe for a terrifyingly realistic pretty girl with problems storyline.

At 1 hour 23minutes, it should be a cinch to get through, but it ekes out of the screen at something that feels closer to 123 minutes. An ambitious script spans from tricky student-teacher relations, family troubles, to a side of friendly backstabbing. Though neatly packaged, some storylines are abandoned too long in favour of others, creating a confusing timeline. Nonetheless, it’s packed with enough nihilistic fodder to further anyone’s existential crisis.

It’s good to see Highmore back on screen, but his boots are heavy with over-characterisation, giving him little space to play with the more complex side to George that’s almost certainly hidden in the subtext of earlier drafts. He is stuck between predeterminism and clueless crushing, leaving little room for personality in the middle. Emma Roberts adds little life to proceedings, ambling around in search of affection without the slightest charming feature and laughing unconvincingly at George’s social idiosyncrasies. As their under-satisfied, over-privileged pals join the fray, it’s clear that this is a film that’s speaks more about the entrapment of adolescence than one man’s crusade against his own overwhelming pessimism.

I recommend having your own existential crisis instead.

The Art of Getting By is released in UK cinemas this Friday 2 September.