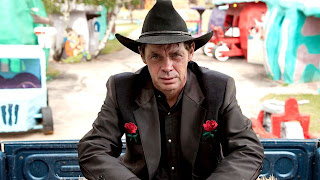 Comedian Rich Hall hits the road as he takes us on his personal journey through the road movie, which, from the earliest days of American cinema has been synonymous with American culture. With his customary wit and intelligence, Rich takes us through films such as Bonnie and Clyde, The Grapes of Wrath, Thelma and Louise, Vanishing Point, Five Easy Pieces and even The Wizard of Oz. He explores what makes a road movie and how the American social, economic and political landscape has defined the genre. — BBC

Rich Hall returned to the BBC with the latest in his series of films about the movies this week with the eagerly anticipated Continental Drifters. Taking on the American road movie in what my man has dubbed the comedian’s, “pre-packaged American culture to be consumed by Brits,” Hall’s new dissertation follows the same formula as his How The West Was Lost and The Dirty South, albeit with some further refinements.

Beginning with an introduction to the road movie and his somewhat arbitrary definition, Hall argues that a true road movie is not only about a pair of characters going from a to b, but that they are in some way disenfranchised. A selection of key films are up for discussion from Easy Rider to Thelma and Louise and The Grapes of Wrath to Dumb and Dumber. Unlike Hall’s earlier forays into film culture, Continental Drifters is less bogged down by constant music video style reel of clips, giving him room to consider and argue the merits of each film and how it fits into the historic and cultural milieu. And, as with all retroactive genres (I’m looking at you, film noir), this link is easy to delineate but endlessly fascinating to watch as it’s laid bare. Eisenhower’s roads highway project is intrinsically linked with noir films of the road, and the resulting motel culture lent itself to the disenfranchised drifters and grifters that followed.

There’s even room for a Gonzo style rant where, in true Hall style, he finds a moment between motels and remakes to insert a rant about Star Wars. I especially enjoyed Hall’s inclusion of The Grapes of Wrath – novel and movie versions – and On the Road as major contributors to the Road movie trend.

As we move into another era of shifting cultural values and a new wave of disenfranchised voices, the road movie – which, in Hall’s opinion, has been practically dead since the 70s – seems particularly prevalent. Whether the road movie has any place in Occupy culture remains to be seen — but it seems the road movie has disappeared in its own fashion: it died… or, if Hall’s expectant ending suggests, after a sojourn in Australia and Europe, it simply went home.