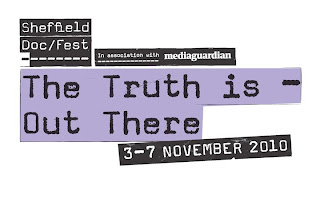 This weekend I hopped on a train to Sheffield to check out its 2010 Doc/Fest. A dynamic festival with its audience in mind, Doc/Fest has bucket-loads of charm and more free goodies than you can shake a stick at.

A filmmakers’ festival through-and-through, Doc/Fest showcases some of the best documentaries you’ll find on the market this year. It also provides distribution opportunities to documentarians, hosting a Meet Market that becomes more saturated each year.

Special guest Joan Rivers opened the festival with her year-in-the-life documentary, A Piece of Work. Directors Ricki Stern and Anne Sundberg followed Rivers for 14 months, documenting her life through a tough period of playing daytime casino gigs, through touring with her play A Work in Progress, and finally celebrating a surge of popularity upon winning Celebrity Apprentice. The tenacious comedienne is as feisty in real life as she is on screen, as she appeared for a Q&A session with the audience after the second screening on Friday night. Most questions were about her family life and former manager, which were not answered in the film. Stern cited the transition from editing to appearing at Sundance as the point where they lost footage about Joan’s family life. Joan declared her love for her gay fans, stating that, “If I look out at the front row and there are 4 gay guys there, I know it’s going to be a good night.” At 75 years old, her no-shit taking attitude and honesty about using comedy as a coping mechanism breaks the illusion of Rivers the old, plastic surgery obsessed comedienne.

I also caught an in person with director Kevin MacDonald (Last King of Scotland, Touching the Void). The Scotsman is marking his return to documentary with Life in a Day, a collaborative project in which amateur filmmakers the world over were invited to document their life and upload short videos to YouTube on 24th July 2010. Now in the process of editing the film, MacDonald was joined by editor Joe Walker to discuss the project. Led by interviewer Stuart Cosgrove, the director discussed the film’s inspirations from the mass-observation movement of the 1930s through Russian film Ana 6 to 18.

We enjoyed an exclusive look at the assembly cut of the opening 10 minutes. Contains clips from around 550 participants MacDonald described his authorial position as one of curation; not making a path through theta jungle with a machete but finding avenues through the available footage. He sees the participants as cinematographers, he says, but it is a collaborative project which he helms as director. MacDonald admits there are flaws. For example, they dispatched 470 low-budget cameras tooter 50 underdeveloped countries, but failed to follow through in helping the contributors to understand the aims of the project and how to best document their day. Nevertheless, the film so far features clips from countries around the world. Life in a Day will premiere in the [experimental section of] Sundance, followed by a brief period of art-house distribution before finally becoming available to download on YouTube.

Along with an excellent selection of films and in sessions, Sheffield Doc/Fest had a whole host of amazing parties, including an 80s Roller Disco and the biggest dinner party I have ever attended.

Paving its way as a friendly, young, and vibrant film festival for filmmakers and enthusiasts alike, next year’s Doc/Fest will take place in June, so mark it in your calendars as the perfect warm-up for Edinburgh International Film Festival.