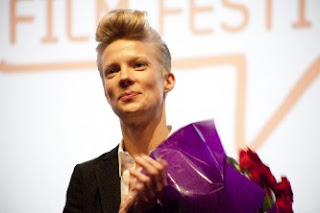 Future My Love is the debut feature from Swedish filmmaker and Edinburgh College of Art graduate Maja Borg.
The film is described as an “experimental documentary”. On the surface, it is comprised of two intertwining stories: a unique love story which challenges our collective and personal utopias in search of freedom, and the story of 95 year-old futurist Jacques Fresco’s Venus Project, which revolves around ideas of a new social model. Maja pitched the film here at EIFF in 2007 and it has been produced by the Scottish Documentary Institute.
Future My Love takes on similar themes to Borg’s earlier short, Ottica Zero (2007), taking us on a poetic road trip that explores our dysfunctional relationship with the society in which we live. Jacques Fresco proposes a social model that provides total equality, providing people make their contributions. The model he suggests is based on the integration of the best of science and technology into a comprehensive plan for a new society based on human and environmental concern.
Fresco’s ideas, which he has been working on for 70 years, still sound radical many decades after they were part of the public discourse. “Jacques is not the easiest character to get under the skin of,” says Borg, “I spent a few months there in total so I’ve had a lot of conversations with this man. But it wasn’t until I was there the third time when we could actually start to have discussions. I don’t think that was because he wasn’t interested… but to actually understand what he says you have to do a lot of research. So I went home and did my homework then came back and then we had very, very interesting discussions.”
So what attracted her to this man and his seemingly outdated mode of thinking? “I think what attracted me to Jacques is that he speaks about things we have in common and things you have to do yourself, and the importance of not creating a wee clique that’s going to do its thing. However long that it is going to take, it has to be a constant dialogue, globally. That’s what he has been doing, he’s been finding information and trying to package it in a way so he can pass it on.”
Along with Jacques’ speeches on societal change – in which he guarantees society can be overturned within 10 years – there are some opposing voices. One truck driver whom Borg records as he gives her a lift acknowledges the problems with our current economy, but shies away from her questions about change due to general busyness. I asked Maja if this is something that came up a lot.
“Oh yeah, totally. And myself as well! We are so busy living our lives that it’s not like we’re necessarily going to care about change until it hurts us personally. When things hurt us personally, the reasons why they hurt us may be a whole chain of questions, and we often go directly to the first one. The truck driver was someone who is not morally agreeing with the system, but completely living it and benefitting from it.”
Being hurt by, and having to negotiate within, a system which has been in place long before ourselves is another theme of the film. By writing a love letter to the idealistic love of her life and illustrating it with Super 8 footage, Borg brings us to the personal side of this constant negotiation.
“If I look at it as a relationship I get so many ways in to then understand it and also understand the difficulties of it and the mechanisms of staying in an abusive relationship. I do think they very much apply because they are structures that we ultimately have to make it easier for ourselves. But they can be abused or we can forget to update them, so what was a secure relationship for a peasant society is not necessarily what’s going to be the most functional or have the most opportunities today.
“I very much hope that people feel that it’s an invitation and not, like, this is me so I don’t care what you think. That would be terrible.”
Placing a personal story shot on Super 8 amidst a documentary may sound like chalk and cheese, but this visceral exploration of heavy themes makes the personal universal, and vice-versa. “It’s scary to shoot on Super 8. It’s one of the reasons why I chose it. When you are trying to talk about things that are much more searching, you need things to respond to, so it’s actually an advantage not to have complete control over the medium you work with.
“I think in every good film you have the sense that this is going beyond language a little bit. For me that’s what art is all about, to expand language.”
Future My Love screened at Edinburgh International Film Festival 2012. Read more about it at http://www.futuremylove.com/