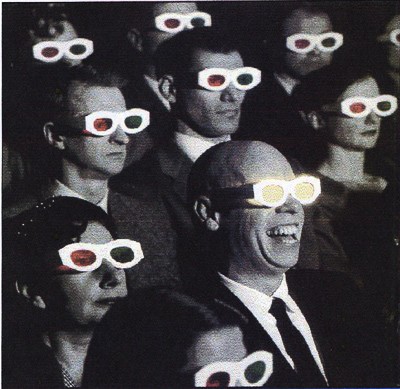 This week, I finally bit the bullet and went to see Avatar in 3D. Better late than never, right? My friend and I have never been fans of the booming trend of 3D filmmaking, but we were never certain why. Needless to say, we soon ascribed to the Kermode school of thought. You’ve heard the arguments, so let’s not drag this out.

Eye-strain: The 3D technology is not yet perfect, as well we know. Our eyes are all different, the glasses don’t necessarily fit well, and the images on screen can be flawed. At several points during Avatar I noticed that the 3D imaging was out of focus, see-through where it shouldn’t be, or plain unpleasant to look at. So much for that Oscar for Best Cinematography.

30% colour loss: This is Kermode’s pet argument, and let’s be honest, it’s a good one. Let’s say that Avatar and Alice in Wonderland are the two biggest 3D films so far. Yes, one is the pioneer in 3D filmmaking and the other is retrofitted, but bear with me. Avatar purports to be colourful, replete as it is with lush meadows, vibrant creatures and kaleidoscopic images. Think how colourful it could have been if we weren’t all seated in the dark wearing a pair of sunglasses. Alice in Wonderland, in contrast, is a dark film with signature Burton shadows. Perhaps I’m heading down the wrong path here – after all, fans of Burton’s Gothic auteurism might have a predilection for donning massive frames and relish doing so in the dark.

Disjointed planes of vision that force your eye onto particular parts of the screen: This is the culprit that causes eye-strain. All that has to be said is this: peering through 3D specs is a very limiting way to watch a film. Your eyes are naturally drawn to the lightest part of the screen; we view a film by scanning the images and resting our eyes where it feels most natural. This organic quality is lost in the 3D world.

The final – the behemoth – argument behind the 3D revolution is anti-piracy. So far, most (if not all) of the big 3D ventures have been screened in 2D alongside the main feature. Surely this is not anti-piracy so much as monetisation and creating hype to herd in the willing? Some cinemas still don’t have 3D technology. Others have enough auditoriums to screen both versions and conceivably still make money from those who missed out on a sold-out 3D screening. How long will it be until we’re left with 3D or nothing? Hopefully it will be a long while. Ideally, it will be never.

What are your thoughts on the 3D revolution? An innovation in filmmaking or a gimmick with a hype machine behind it?