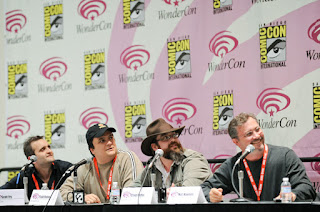 The panel was fairly free-form and informal but, displaying some of that infamous Southern Hospitality, the guys handed out free schwag to everyone who asked a question.

They also screened this brilliant short film: Behind the Scenes of Radical Axis Animation Studios:

The Radical Axis crew also invited the audience to participate in a game of Finders Keepers. Todd designed a piece of artwork – a mutant shake – and stashed it away somewhere in the city of San Francisco. If you find it, you get to keep it. More details of this are available on Todd’s blog, and you can find updates about it on their Twitter.

A lot of people at the panel asked what inspires you when you make a new show, but what are your influences? What did you grow up watching?

Was it always the wackier animations that drew you in?

How much cross-pollination is there between your shows? 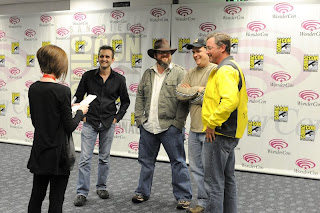 Tell me about the process when you all work together. Do you do a lot of real-time collaboration in the studio via instant messaging and so on?

Do you consider your audience as you create, or go with what’s funny to you?

Do you ever watch the shows back, and does it ever remind you of a particular moment when a joke was formed or the idea that sparked it?

Does having your own company and a fairly exclusive audience make it easier to have explicit content, or do you still have things censored and sent back?

The first two episodes of Archer premiered on UK screens in February. The series screens on FIVER on Thursdays at 10pm. Archer is also currently free to watch at the Channel Five website.