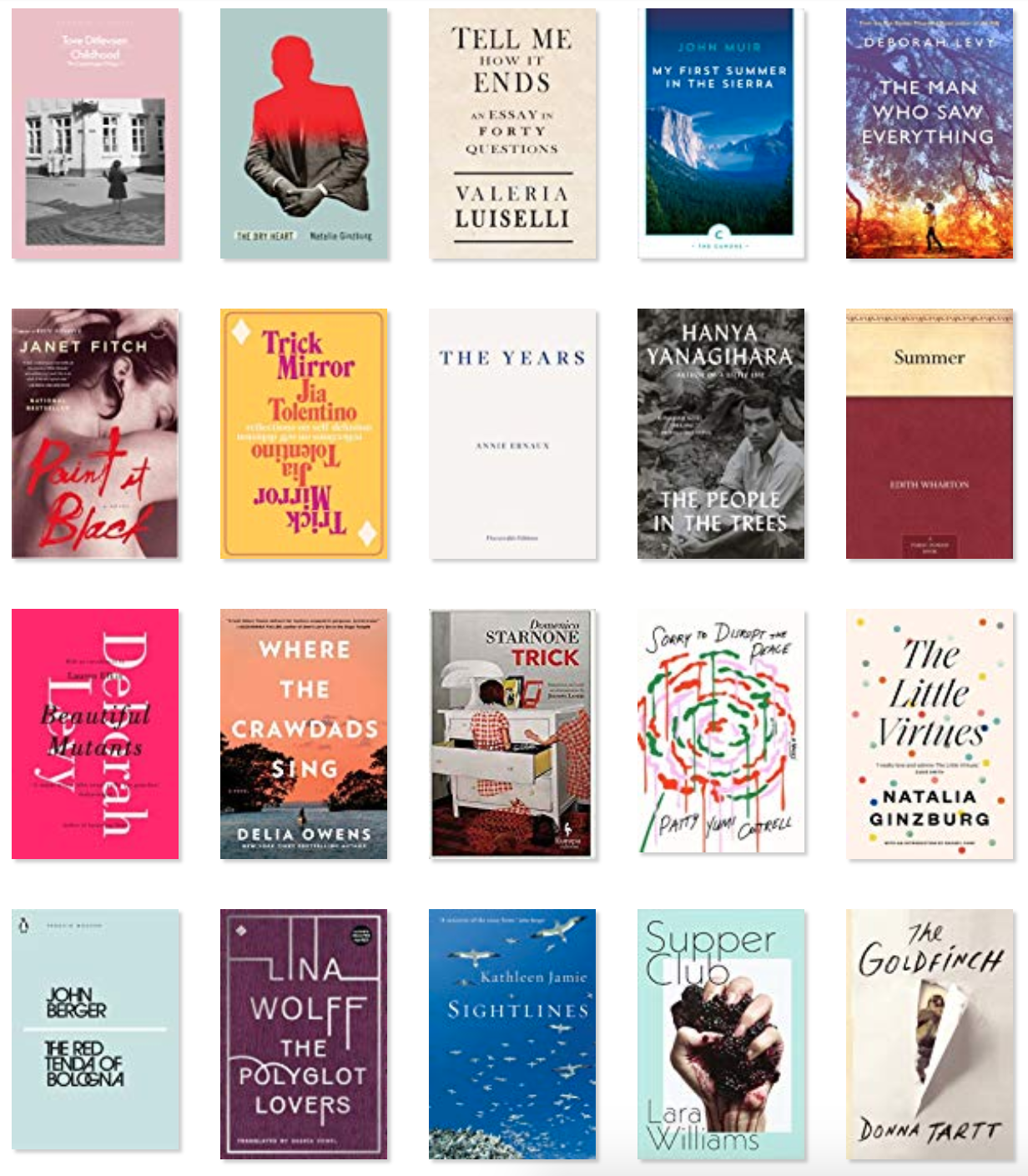 8. Where’d You Go, Bernadette? by Maria Semple (re-read) [book club]
9. In Other Words by Jhumpa Lahiri
10. My Sister, The Serial Killer by Oyinkan Braithwaite
11. The Awakening by Kate Chopin
12. The Collected Schizophrenias by Esme Weijun Wang
13. Daisy Jones & The Six by Taylor Jenkins Reid

14. The Seven Deaths of Evelyn Hardcastle by Stuart Turton [book club]
15. Lost Children Archive by Valeria Luiselli
16. The Friend by Sigrud Nunes
17. Can You Ever Forgive Me? by Lee Israel

18. The Folded Clock: A Diary by Heidi Julavits (re-read)
19. Stay With Me by Ayọ̀bámi Adébáyọ̀
20. Middlemarch by George Eliot
21. Kudos by Rachel Cusk

23. Happening by Annie Ernaux
24. Drive Your Plow Over the Bones of the Dead by Olga Tokarczuk
25. The House of Mirth by Edith Wharton
26. The Wife Between Us by Greer Hendricks & Sarah Pekkanen [book club]
27. People In The Room by Norah Lange

28. Family Lexicon by Natalia Ginzburg
29. What If This Were Enough? by Heather Havrilesky
30. The Goldfinch by Donna Tartt
31. Supper Club by Lara Williams
32. Sightlines by Kathleen Jamie
33. The Polyglot Lovers by Lina Wolff
34. The Red Tenda of Bologna by John Berger
35. The Little Virtues by Natalia Ginzburg
36. Sorry to Disrupt the Peace by Patti Yumi Cottrell
37. Trick by Domenico Stranone

38. Where the Crawdads Sing by Delia Owens [book club]
39. Beautiful Mutants by Deborah Levy
40. Summer by Edith Wharton
41. The People in the Trees by Hanya Yanigihara
42. The Years by Annie Ernaux
43. Trick Mirror by Jia Tolentino
44. Paint it Black by Janet Fitch [book club]
45. The Man Who Saw Everything by Deborah Levy
46. My First Summer in the Sierra by John Muir

47. Tell Me How it Ends by Valeria Luiselli (re-read)
48. The Dry Heart by Natalia Ginzburg
49. Childhood by Tove Ditlevsen
50. A Girl Returned by Donatella Di Pietrantonio
51. A Working Woman by Elvira Navarro
52. Year of the Monkey by Patti Smith

62. The Heavens by Sandra Newman
63. Wait Until Spring, Bandini by John Fanta
64. Dependency by Tove Ditlevsen
65. West by Carys Davies
66. You Think It, I’ll Say It by Curtis Sittenfeld [book club]
67. The Alchemist by Paolo Coelho (re-read) [book club]
68. Dept of Speculation by Jenny Offill (re-read)
69. Tokyo Fiancée by Amélie Northomb
70. Nothing Natural by Jenny Diski

71. Make It Scream, Make It Burn by Leslie Jamison
72. I Lost My Girlish Laughter by Jane Allen
73. The Light We Lost by Jill Santolopo [book club]
74. The Parable of the Sower by Octavia Butler [book club]