July has been a busy month, and one of lots of little reads.

What have you been reading this summer?

#35. Why I Write by George Orwell
★★★★★ – It’s about time, right? I picked this up to read ‘Why I Write’ and ‘Politics and the English Language’. Both seminal essays, both by this legendary author with whom I haven’t always got along. These were great, but the other long essay in this book, ‘The Lion and the Unicorn’, was pretty dry and of its time. Still, I’m glad I revisited it.

#36. The Chrysalids by John Wyndham
★★★★★ – I now realise where these spates of YA dystopias get their formula. While reading many from that genre earlier in the year, I was constantly struck by the precise timings of chase scenes and the ways in which trouble is choreographed and characters wriggle out of situations. That being said, I quite enjoyed this one.

As an adventure, quite a fun, enjoyable and easy read. However it does rely a little too heavily on simple characters, grandstanding speeches and imagery which exists only in the protagonist’s mind throughout. For a first person narration I felt quite distant from events. Good drama yet quite dry at points – but it definitely must’ve been ahead of its time. 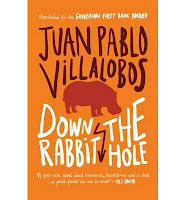 #37. Down the Rabbit Hole by Juan Pablo Villalobos
★★★★★ – An astonishing wee novella from the mind of the precocious son of a Mexican drug baron. It’s been done before, but when the character’s quest is in the form of the hunt for a Liberian Pygmy Hippopotamus the author totally gets away with it. Hilarious prose, brilliant characters, nice wordplay and a good, fun story.

#38. Mr Penumbra’s 24 Hour Bookstore by Robin Sloan
★★★★★ – 3.5 and swithering on marking it as a 3 or a 4. It’s a good fun read, written with verve, and perfect for people in that forgotten demographic of late teens and early twenties. I enjoyed the themes of old vs new knowledge, books vs computers, and the mystery element. I didn’t really buy into the puzzles as everything was resolved very conveniently: quick fail, quick turnaround, quick solution – which rather killed the tension. Overall it’s a good summer read, upbeat and irreverent yet largely unpretentious.

Scott Pilgrim vs The World #1, #2, #3 by Bryan Lee O’Malley
★★★★★ – I’ve loaned these from a friend and am really enjoying them so far. Inventive, original, colourful (despite being black and white), with great characters and a brilliant story. I was a fan of the film and am finding still more to enjoy in the depths of O’Malley’s characters and slowly unravelling storyline.