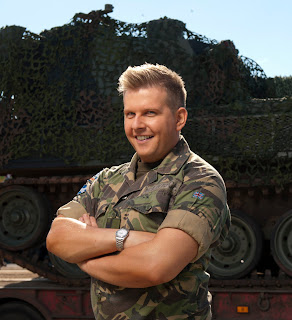 After winning a Scottish BAFTA for Gary’s War, Greg McHugh – the man we all know as Gary: Tank Commander – has gone on to write and star in two series of the titular show. Following in the footsteps of Scottish favourite Rab C. Nesbitt, the show’s second series went regional with a run on BBC Three.

The sitcom features Gary, a camp Corporal with a penchant for Cheesey Pasta. Series two is set mostly in Scotland as he and his unit – Charlie (Scott Fletcher), Jacko (Robert Jack) and Adam (Paul-James Corrigan) – get themselves into tangles, from featuring in an army ad to misplacing an army tank, all under the scrutiny of sticky Sergeant Thompson (Stuart Bowman). Interspersed with political pieces to camera from Gary’s unique perspective, and a range of YouTube dance parodies, it’s an all-round Scots comedy with its own brand of humble humour.

McHugh has also recently appeared as Howard, a creepy second year student sharing a house with a bunch of freshers, in eight-part comedy series Fresh Meat, and is currently working on a third series of Gary’s military antics.

As he prepares for series two to hit the shelves in time for Christmas, we caught up with the man behind the permatan and bokes (Baileys and Cokes). 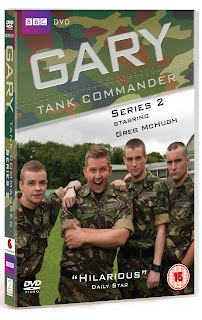 So tell us how Gary was born.

Back in 2005 I was doing a show at the Edinburgh Festival, working with a guy called Will Andrews who was doing a stand-up show in the same venue. He was working with The Comedy Unit who were looking for new characters, so it basically came out of Will and I chatting about rubbish and then filming a little scene in my mum’s car. The Comedy Unit saw that and it started about four years of development and various sketch shows and stuff, then – after a lot of work – the BBC offered us a sitcom.

How has the response been for Series Two so far?

It’s been great. It’s always difficult to know, but it’s been well received. I’ve been asked to start working on the third, so it has done really well so far. It got onto BBC Three and that was an ambition, so I was over the moon about that. If the third series goes well I hope they’ll stick it on BBC Three again.

You’ve also had a great response for Fresh Meat – has that been a different experience for you?

Yes, completely different. There’s no pressure on me other than as a performer, as an actor. Because the scripts were so brilliant that was a total joy. Gary’s loads of fun but it was great to play someone at the other end of the spectrum, in terms of Gary being quite sociable and Howard being… just a bit weird, really. It was great.

As much as you enjoyed playing Howard, was it refreshing to get back to being Gary?

It’s always a challenge, I suppose. I’ve got to come up with new ideas for the series. I’m tweeting a lot as Gary [@GARYTANK] at the moment and trying to get Gary into my head, so it’s a change. I don’t know how refreshing it is because I’ve done so many years as Gary, but I’m really looking forward to doing another series. It is fun at the moment but I’ve just started the process so if you ask me again in a few months I might be tearing my hair out.

Can you give us any teasers for Series Three?

As I’ve just started writing it I couldn’t really tell you much to be honest. I think we may go for a different setting – the boys might have been in Germany on the previous 6 months, post-Iraq or Afghanistan. That might be a change, but I’ve still got another 5 or 6 months’ worth of writing still to go so who knows where we’ll end up at the end of it. But I think there’ll be more dances, and there has been a lot going on in the world this year so Gary’s got a good platform to talk about things. We’ll wait and see what happens.

The monologues are always very relevant to what’s going on at the time. How do you make sure that will work a year down the line when the DVD is released?

I suppose you just try to pick events that people will remember. Osama being captured and killed, or Gaddafi and the uprise in the Middle East, The Royal Wedding – you know, these are all things that have happened this year, so even in a year or two’s time, people will still remember the landmark events. So you either choose a big thing or, for Gary, you choose to have him talking about everyday things like Gregg’s the bakers. That way, hopefully, it doesn’t age too much.

But I think the point of what we’ve always tried to do with Gary is to talk about things that have happened around that time frame. It’s about covering world events, really.

Probably the missing tank episode. It’s the most sitcom-y episode and it moves quickly – I think that’s what people respond to. Gary keeps causing more problems for himself but he thinks he’s doing really well.

He always seems to make a friend, as well…

You’re right, he’s quite a sociable guy. He’s a confident soul, really, that’s his underlying character trait. I think the more confidence you give Gary in every situation in that sitcom world the worse things are going to get. That’s something I’ve certainly learned over the years – give him so much confidence in whatever it is and see where he ends up. He’s a bit childlike too, a bit naive and obsessive, so once he gets one idea in his head he’ll run with it no matter how badly things are crumbling around him. That’s a good thing to have for writing comedy.

You mentioned enjoying the sitcom feel – is that something you might expand upon in Series Three?

I wanted to mention how great the boys are, too. They’re all very good dancers…

Yes, they’re all scarily good dancers. I would like to say that I dance as Gary, but actually that’s me trying my hardest. They’re all really good, and Paul Corrigan who plays Adam is a brilliant dancer and has loads of experience, so he helps choreograph some of the dances as well. He’s a shit-hot dancer indeed.