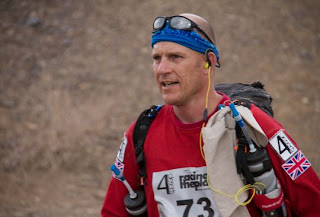 The RacingThePlanet’s 4Desert Ultramarathon Series is an extreme running challenge – the hardest of its kind in the world. It comprises of four 250km races across the Atcama Desert in Chile (the world’s driest), Gobi Desert in China (the most changeable), Sahara in Egypt (the hottest), and the snows of Antarctica (the coldest).

What’s more, Steinman’s first subject, Dave, was 56 when he announced he was going for the Grand Slam: all four titles in one calendar year. The first person to achieve this was professional ultramarathon runner and co-producer Dean Karnazes.

Upon discovering Dave, “I had never heard anything like this before in my life,” Steinman told us by phone ahead of the film’s first screening. “I was looking at this skinny, goofy guy on stage saying he was going to do this, and I was just taken with him. I was looking at him and thinking, this guy is not that much younger than my mother, and my mother thinks she can’t walk around the block, so what makes this guy think he can run 1000km through the desert? “I was really drawn to this idea of why someone would think this thing is possible, that other people think is impossible – what is that all about?”

So does this director still think these runners are crazy? “Well, I get it now, in a way that I didn’t before,” said Steinman. “The first thing people always say when you tell them what these people are doing is, ‘Oh my God, they’re crazy,’ so that was one of my big questions for them when we were out in the desert: why is this not crazy? Why is this not a crazy thing to do? I was constantly asking everyone that because I wanted to see what their response was.”

For the runners it is as much of a mental game as it is a physical one. “For them it’s all about how you approach it. So they never think about 250km – they think about the next 10km to get to the next checkpoint. Almost everybody out there does that. If they stopped and thought about the whole of it, they’d be completely overwhelmed,” said Steinman. “So everybody out there has their own way of breaking it down or making it seem doable or possible. I was really interested in those human coping mechanisms.”

This certainly comes across in the film as inhospitable landscapes and the issue of mind versus body are but two of the runners’ greatest challenges. “I always tell people that the biggest thing I learned out there was this: This has nothing to do with fitness,” said Steinman. “It has absolutely nothing to do with fitness. I saw some of the most fit people with the most insane bodies you’ve ever seen in your entire life, who were in the most amazing shape in the world, not make it – and I saw people who you’d think could never in a million years run 5 miles, much less 155, make it.

“I saw one 50 year-old guy who’d barely ever worked out before wearing Tiva sandals walk the entire course in the Sahara Desert and make it. So what I really learned was that it was entirely a mental game. The thing I noticed is the difference between the people who made it and the people who didn’t make it: the people who made it always believed that they would, and never let doubt enter their mind.”

Doubts and the mental game are also a big part of this dramatic yet intimate film which at once shares the runners’ agony, devastation and triumph. One runner, Tremaine, told Steinman that the filming changed his experience of the races. Steinman said that, “He told me that because I made me talk about it as it was happening and express his feelings, he discovered so much more about himself by having that conversation. He said, ‘If there hadn’t been a film crew there, I don’t think it would’ve been as profound an experience for me.’”

The filmmakers have also created a community around the film, which began with a Kickstarter campaign to raise a small portion of their budget. “I never ever thought I’d say fundraising was fun, but that 30-day Kickstarter campaign was really fun,” said Steinman, “t’s that whole “it takes a village” thing.”

The runners operate under the same notion, creating a tangible sense of camaraderie and mutual support. In fact, Steinman can also be seen on the sidelines, cheering on the runners. The filmmakers became a part of the ultrarunning community at the races, which is evident in the film itself, “There are alot of shots of me in the movie, just like hanging out,” she laughed, adding that there should be a competition for spotting her. “We all became really really close. We, as filmmakers, were definitely part of it.”

The World Premiere of Desert Runners took place at Edinburgh International Film Festival. Keep up to date at http://desertrunnersmovie.com