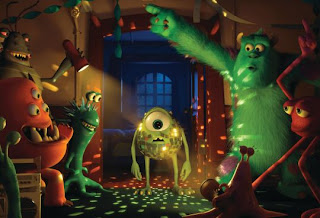 Disney•Pixar films have been opening at Edinburgh International Film Festival for many years now. From Ratatouille to Wall-E and Toy Story 3 to Brave, Monsters University now continues the tradition of Disney•Pixar’s fondly held place at the EIFF.

“I’m very excited to be representing Pixar and Pixar is excited to be back, of course,” said Clark. “This is my first time in Scotland. I love Edinburgh. It was fun to introduce the film today.”

Clark has been an animator at Disney since shortly after the release of Toy Story in US cinemas. “My favourite Pixar film is Toy Story. It’s the only one where I wasn’t around. It was the film that got me interested in computer animation and Pixar. When I did my internship it was still in [movie] theatres. I have a lot of fond memories, not only of the film. It’s great that it’s the first computer-animated film but it’s also the beginning of my career and I’ve had a lot of fun since then.”

Since much of the film takes place on campus at Monsters University, the animation team worked hard to get back into the mindset of college life. “We did a lot of research,” said Clark. “We went to Harvard, UC Berkeley, and Stanford, and just walked around and pretended we were students. What was funny was that a lot of the people, including the director, we all went to art school… and practically none of us had been in a fraternity or sorority. We also weren’t familiar with certain aspects of the American college culture, and that was part of our story, so we really wanted to invest in it.

“The research is also really fun and, of course, we were also all in college so there were things where we were researching and were like, ‘Ahh, I remember that!’ It was good to go back to that energy and the fun of being in school again.”

Clark also had a lot of fun animating younger, more inventively fictional characters. But is it easier or more difficult than animating humans?

“Well, first of all, animation is hard! Even if you’re animating Cars, which is probably the simplest world we’ve animated, the rules are simpler, but it’s even hard there. But the most difficult challenge is something like Brave, when you have humans. The closer to human it gets, the more naturalistic it needs to be.

“With Mike and Sulley, or a world like Monsters, it’s really fun because they’re caricatures of animals, people, they’re really people through monsters. So we recognise our sister or brother or uncle through these funny characters. But what was challenging in Monsters was the scope. In Monsters University, the scope of characters which we had to animate was just tremendous, every scene, every background. We did not have that scope on the first film, Monsters Inc.”

He also spoke about his favourite scene in the film. I didn’t get to animate much because I was the supervising animator,” said Clark, ”but one of the scenes that I did do was to animate Sulley at the Roar Omega Roar frat party, when he’s not participating then Squishy does the cowboy roping him onto the dance floor move.

“Another animator animated Squishy, then I had Sulley, I animated him getting reeled in onto the dance floor. That was fun for me because I like dancing and I thought it was an interesting challenge to try to, how do I get this character that has long, lanky arms, short, stubby legs, and a neck that sticks out… he’s kind of goofy, he’s not built to dance, so how do I get him to look… he’s confident and cocky in this movie.

“So how do I get that 18 year-old, confident and cocky, but perhaps under the surface insecure and trying to be cool? there’s a complexity to being at a party and trying to fit in and trying to find out who you are and that was pretty fun. As an actor I’m thinking about all that stuff, it’s just a funny scene, but it was fun, and it was fun to get that track and listen to it and animate to it. It’s pantomime, that was all the animator performance.”

Monsters University is released in UK cinemas on 12 July 2013.